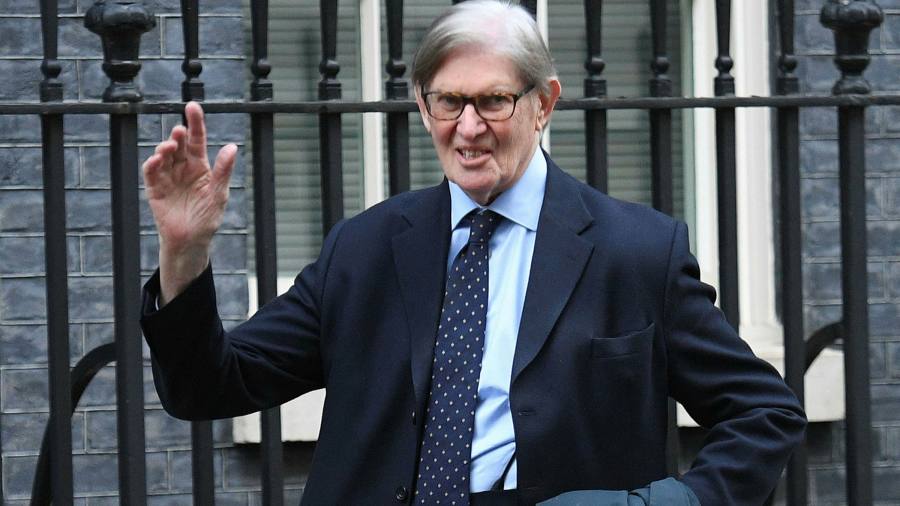 Boris Johnson will on Tuesday nervously await any signals from a meeting of three lawyers who form the “star chamber” of the hardline pro-Brexit wing of his Conservative parliamentary party.

Convened by veteran Eurosceptic MP Sir Bill Cash and attended by lawyers Martin Howe and Barney Reynolds, the trio are expected to dissect the prime minister’s proposal to unilaterally override the contentious Northern Ireland section of his Brexit deal with the EU that angers both anti-EU MPs and unionist politicians in Belfast.

An endorsement from the influential European Research Group of Tory MPs will be vital in giving the prime minister sufficient support to pass his bill. Without ERG support, he will struggle.

The return of the star chamber echoes Johnson’s last encounter with his party’s most ardent Eurosceptics. Back in December 2020, the group declared his Brexit trade deal to be not “perfect” but adequate. A year and a half on, that deal is being unpicked with the ERG in the front line of the process.

Whereas some Conservative MPs fear that unilaterally overriding the Northern Ireland protocol will break international law, the ERG is chiefly concerned whether the new bill goes far enough. One prominent member said: “This is the last part of Brexit and we have to make sure we have fully taken back control.”

The ERG was founded in 1993 by Sir Michael Spicer, a Tory MP concerned about the Maastricht treaty that created the basis for the EU in its present form. The group initially existed to write pamphlets and research advocating looser UK ties with the bloc.

But the group gained much greater prominence after the 2016 Brexit referendum, when it was central to frustrating attempts by the then prime minister Theresa May to deliver a softer Brexit. It advocated the cleanest break possible with the bloc.

With no parliamentary majority, May was exposed to the group’s influence. Under the leadership of former minister Steve Baker, the ERG developed a highly organised whipping operation that managed to defeat the government. Some MPs claimed it had become a “party within a party”.

Membership of the ERG is unknown, no lists are published. At the peak of the Brexit conflicts within the Tory party, 90 MPs were part of its co-ordinating WhatsApp group — 30 per cent of the parliamentary party. One veteran member said its present roster was “enough” to wipe out Johnson’s parliamentary majority of 80.

The group was influential in supporting Johnson’s rise to the Tory leadership in the summer of 2019. Although the caucus did not endorse any candidate in the contest, Johnson’s pledge to deliver Brexit, deal or no deal, found favour in the group. “We basically made him,” one ERG MP claimed. “But I don’t think the group is tied to any one person”.

Leaders of the ERG said the group was extremely well organised on European issues but denied they were dictating policy to Johnson across other areas or acting as a praetorian guard to the prime minister — that they will protect him but only while he does their bidding. “It’s wall-to-wall baloney,” said an ERG MP.

The ERG has been highly influential in Johnson’s decision to override parts of the Northern Ireland protocol.

Some MPs from the group have met with senior figures in the Johnson government to shape the bill published on Monday. Downing Street has not denied that the ERG were consulted about the legislation, but Number 10 insists the prime minister has not fully kowtowed to the group.

No one from the ERG was prepared to comment on the record. But Mark Francois, its chair, told The Telegraph “the devil is often in the detail” and said the group would examine the Northern Ireland bill “line by line” to ensure it was “not only legally sound but fully restores the sovereignty of UK law in Northern Ireland, as an integral part of the United Kingdom”. He added that it would publish its conclusions at the latest before the end of this month.

Those briefed on the drafting of the protocol bill said Johnson did dial back some of the ERG’s most hardline demands, even if the Eurosceptic caucus secured much of what it wanted.

In particular, the European Court of Justice, while removed from its role in policing the protocol, could still play a part in interpreting EU law under the bill. Many Eurosceptics want to see the Luxembourg court removed from UK national life altogether.

The ERG has also demanded a four-year “sunset clause” after which a dual-regulation system in Northern Ireland — where businesses could choose whether to place their goods on the market under EU or UK regulatory standards — would end.

One ally of Johnson said that an automatic reversion to UK standards after four years would have complicated north-south trade across the open border in Ireland.

The bill, which will — at the very minimum — take months to push through both houses of parliament, will ultimately only give ministers powers to change the protocol, rather than forcing through changes automatically the moment the legislation becomes law.

Ministers will nervously await the ERG’s verdict on the legislation. Johnson last week snapped at Liz Truss, foreign secretary, for ceding too much ground to the ERG in last-minute drafting of the bill, claiming she risked hardening the government’s position so much that further EU negotiations would become impossible.

Ministers think Truss was keen to appease the group with an eye on a future Tory leadership contest. “Liz knows she would need the ERG’s support if she wants to succeed Boris if he falls,” one minister said. “Her game is totally obvious, it’s not about Brexit at all.”

Christopher Pissarides: ‘Debt and inflation could see us lose control’