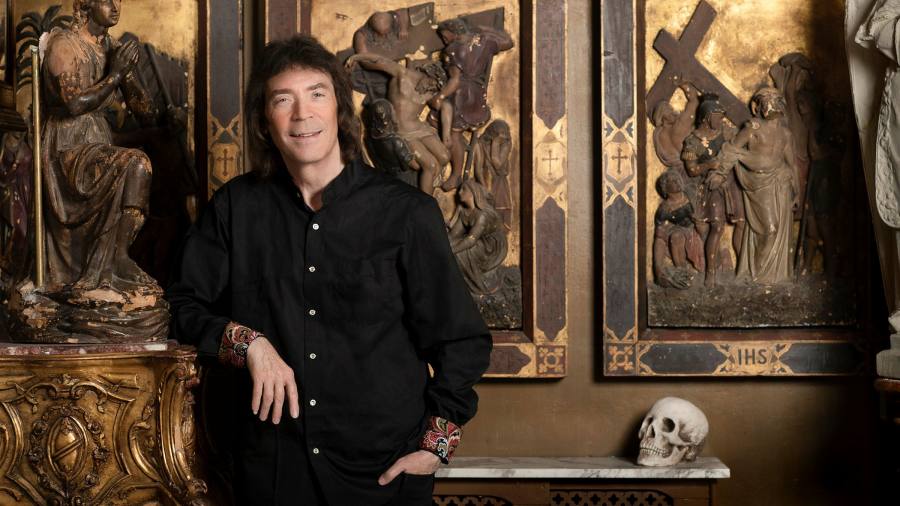 Guitarist Steve Hackett on early Genesis: ‘It sounds better and better with time’

Genesis might have rocked themselves into extinction with their final concert at London’s O2 Arena in March, but guitarist Steve Hackett is far from finished with the songs he co-wrote and performed during his 1971-77 tenure with the band. Next month, Hackett and his own group will begin a 25-date UK tour marking the 50th anniversary of Foxtrot, the second of the six Genesis studio albums he burnished with pastoral arpeggios, soaring solos and occasional bellicose riffs.

“I think it sounds better and better with the passing of time,” says Hackett, 72, of the Foxtrot album. He’s an affable interviewee, but he’s also assiduous about safeguarding his contribution to Genesis’s history, pointing out that it was his idea to join the disparate songs that make up “Supper’s Ready” in a cohesive suite.

“I’d seen King Crimson in their formative stage before they recorded In the Court of the Crimson King,” Hackett explains, referring to the 1969 album that ignited the prog-rock movement. “When they were finishing their shows, they’d link up pieces that were extremely different from each other. One minute they’d be doing jazz, then they’d suddenly go into Cliff Richard’s ‘The Young Ones’” — he laughs at the anomaly — “then switch to Holst’s ‘Mars, the Bringer of War’.

“I’d never previously heard anything that was long-form from a band before that, apart from Sgt Pepper’s Lonely Hearts Club Band,” he continues. “I suggested to Genesis it could work very well for us live if we had our own light show and all the bells and whistles. ‘Supper’s Ready’ was eventually written in about two weeks. We all contributed to it and jammed some sections together.”

Their live performances were also transformed as Gabriel began to come out of his shell and add a theatrical dimension to the stage show. “Pete started to live the songs, dressing in costumes to personify the lyrics, as he did on ‘The Musical Box’ [from the 1971 Nursery Cryme album on which Hackett made his Genesis debut] and on ‘Watcher of the Skies’ [the Foxtrot opener],” recalls Hackett. “That brought us a lot of press, and when [the British music publication] Melody Maker decided we were a happening band our fortunes changed tremendously, though it took a lot longer to convince the Americans.”

Hackett is reluctant to analyse the meaning of “Supper’s Ready”, a bottomless source of speculation among progressive rock diehards. “Pete wrote the lyrics and all I can do is offer my interpretation,” he says. “There’s a battle between good and evil in it, the middle ‘Willow Farm’ pantomime section — which Pete described, lyrically, as a Zen farm where anything can happen — references to the Book of Revelations, aspects of a love story from Pete’s relationship with his first wife, Jill, and hints of an afterlife. Pete would say that every time we played it, he felt he was singing for his life, and it’s the same for me when I play guitar on it 50 years later. I go for it for all I’m worth, to ring every last note out of it.”

The lone keeper of the flame for Genesis’s early music (tribute bands such as The Musical Box aside), Hackett has been playing “Supper’s Ready” live since he re-recorded it in 2012 for the second of his Genesis Revisited solo albums. It will also feature on the forthcoming live album Genesis Revisited — Seconds Out and More, which captures Hackett’s 2021 tour recreating Genesis’s 1977 Seconds Out live album and includes other Genesis and Hackett favourites.

Whereas post-Hackett Genesis achieved massive global success by embracing a commercial adult-oriented rock style in the 1980s, Hackett has adhered primarily to prog rock. The substantial early Genesis fan base still hungry for the strangeness, grandeur and technical virtuosity of the group’s 1971-77 albums follows him devoutly.

Hackett didn’t slow down as his career moved into its sixth decade during the pandemic lockdown. He set about making his radically different 26th and 27th solo studio albums. Forced to leave his electric guitars in the US when the pandemic interrupted his 2020 tour, Hackett returned to the UK — “we got the last flight out of Philadelphia, literally” — and recorded the acoustic Under a Mediterranean Sky. A mellow virtual travelogue orchestrated by his musical partner, Roger King, it reached number two in UK classical album charts following its release in January 2021.

Nine months later, the re-electrified Hackett issued Surrender of Silence, which augments his prog rock style with an eclectic mix of world music played by performers he’d met on his travels. It also features some of the most abrasive songs that Hackett, long a purveyor of ethereal and numinous moods, has recorded.

“Fox’s Tango”, for example, marries some of Hackett’s angriest guitar work yet to a denunciation of Fox News, even as it throws in a jokey nod to “foxtrotting”.

“It’s about post-truth media being all-pervasive,” Hackett says. “And also about the world suffering from compassion fatigue. The worry is that if we carry on down that path, we’ll end up with refugee camps with half the world holding the key on the other half, the haves divided from the have-nots. 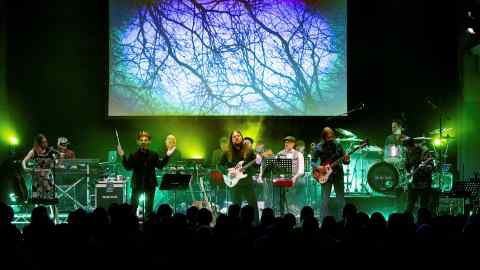 “I think that album was pre-emptive in patches,” Hackett adds, referring specifically to “Natalia”, which addresses “repression” and “depression” as suffered by a Russian everywoman through the centuries. To lyrics written by his writer wife Jo (formerly Lehmann), Hackett matched themes from Prokofiev, Tchaikovsky and Stravinsky “to make it a film for the ear rather than the eye”.

Gabriel attended but didn’t perform at the final Genesis show, during which Collins announced his retirement. Though Hackett wasn’t in the audience that night, he has often said he would still make music with his ex-bandmates, in the unlikely event that was possible.

“The last time the band approached me to do anything with Pete was in 2005,” he says. “A limited number of dates were being discussed and various other things were on the table. I said, ‘Sure, I’m up for it. Call me if and when you want me.’ And in the years since then, I’ve honoured the work we did together. So I’m not going to lose any sleep waiting for that call. I’ve always given the idea of a reunion a green light, right? But the others” — and he laughs again — “are maybe stuck on amber.”

The ‘Foxtrot at 50’ tour begins in Swansea on September 9. ‘Genesis Revisited Live: Seconds Out & More’ is released on September 2, hackettsongs.com

My year of ROTC | Inquirer Opinion

PGA Tour’s Jay Monahan vows to ‘vigorously’ defend against antitrust lawsuit: ‘This is your Tour’