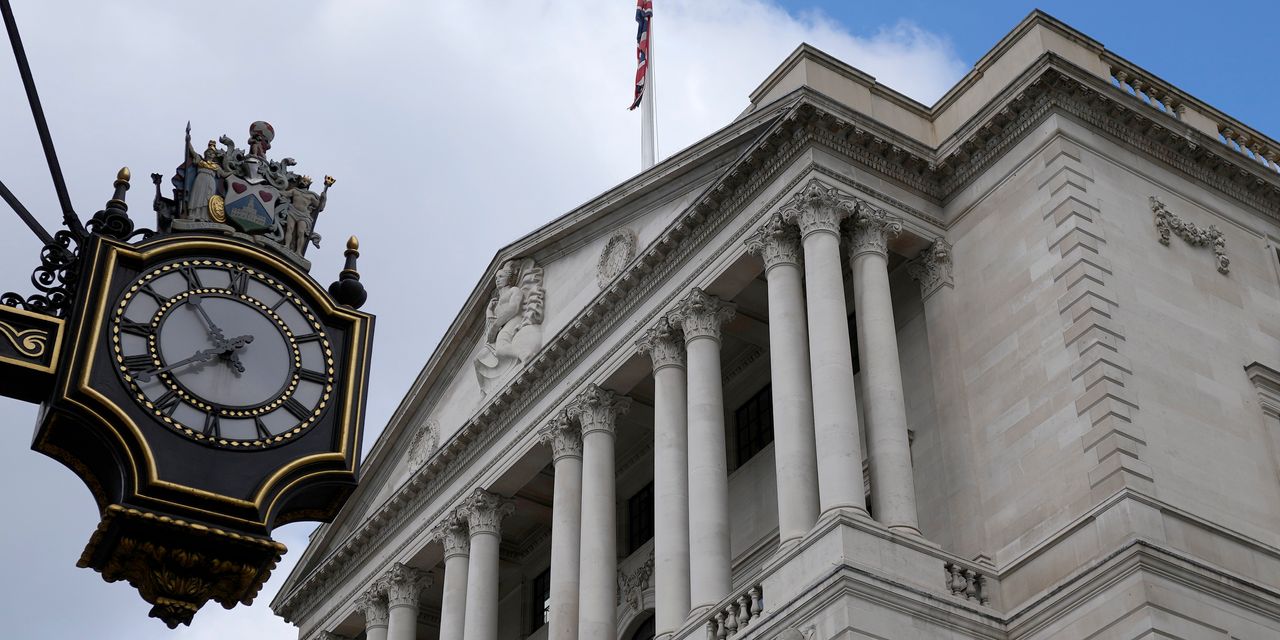 Forget the Economy: Central Bankers Will Only Care about Inflation

Not even a floundering economy will stop central bankers from prioritizing their inflation mandates.

On Thursday, the Bank of England pushed interest rates up by 0.5 percentage point to 1.75%—the most stringent tightening of monetary policy since 1995. Rate setters said that growth in the U.K. consumer-price index is now expected to peak at 13% during the final quarter of the year, compared with the “slightly over 10%” forecast it made back in May.

What was remarkable is that, as it delivered a supersize rate increase, the BOE predicted the British economy would fall into a recession in the fourth quarter. This recession, triggered by high energy prices eating into household budgets, isn’t expected to be “technical” or short-lived, as many are currently forecasting for the U.S. Officials believe U.K. output will fall 2.1% over the next year and remain flat in the year after that, increasing the unemployment rate to 6.3% in the third quarter of 2025, from 3.7% now.

“The alternative is worse, in terms of persistent inflation,” BOE Gov. Andrew Bailey said in a press conference.

Short-term gilt yields remained broadly unchanged, because markets had already priced in the rate increase. But a small drop in sterling and 10-year gilt yields suggest investors expect interest rates to be lower on average over the longer term, given the prospect of a downturn.

Treasury and bund yields also have fallen, even as the Federal Reserve and the European Central Bank have turned more hawkish, because investors interpret signs of the economy cooling as evidence that officials will need to ease up on the brakes—an impression reinforced last week by Fed Chairman Jerome Powell.

The picture in the U.K. is even more telling: The gilt yield curve suggests that the BOE will aggressively raise rates over the next year and then course-correct and quickly start cutting them.

This “bad news is good news” trade has led the S&P 500 to gain around 9% over the past month. Investors are probably right that long-term rates will need to stay low, particularly in Europe. In the next couple of years, however, rates could go higher than they think.

BOE officials showcase this: They talk about “domestic inflationary pressures” having increased, while admitting that higher inflation is overwhelmingly due to commodity prices beyond their control, especially after the war in Ukraine. U.K. pay growth has been faster than prepandemic, but subdued compared with inflation. Forecasts have CPI growing 9.5% in the third quarter of 2023 and suddenly returning to 2% a year after, as energy markets normalize.

In recent times, market commentators have been guilty of theorizing too much about central bankers’ new “reaction functions,” inflation expectations and officials’ aim of walking a “narrow path” between employment and inflation. But people sitting in rate-setting committees ultimately have a job: To bring one number—headline inflation—in line with another number—their 2% target. Unemployment figures don’t color their reputation nearly as much, even in the U.S., where they are also part of their official mandate.

Will they stop raising rates if a recession brings down inflation, or if supply bottlenecks solve themselves? Sure. But as long as that number remains elevated, no amount of rationalizing investors can come up with will keep a lid on rates.

Denial of responsibility! Elite News is an automatic aggregator of the all world’s media. In each content, the hyperlink to the primary source is specified. All trademarks belong to their rightful owners, all materials to their authors. If you are the owner of the content and do not want us to publish your materials, please contact us by email – [email protected]. The content will be deleted within 24 hours.
Bank of EnglandbankingBanking/CreditCentral bankingConsumer Price IndexContent Typescrediteconomic growth
0
Share FacebookTwitterGoogle+ReddItWhatsAppPinterestEmail