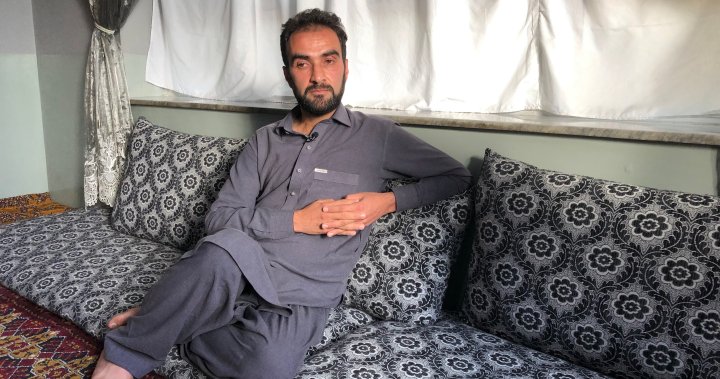 Muhammad Munir Ibrahimi used to proudly introduce himself as the program director at the Kabul office of Canadian Women for Women in Afghanistan.

He’s more careful about it now.

Fearing it put him on a collision course with the Taliban, he scrubbed his social media, grew a beard and applied for refuge in Canada.

“We feel insecure for ourselves and our families,” he said in an interview at his home in Kabul.

Read more:
Inside the Kabul safe houses where Afghans wait to be evacuated to Canada

While Canada’s Afghan resettlement effort is focused heavily on locals who worked for the Canadian Forces, employees of Canadian aid projects are also feeling vulnerable under the Taliban.

They fear that being associated with projects that promoted progressive causes and were funded by the Canadian government has left them at risk under the Taliban.

Many NGOs did not want to be identified, but Global News spoke to Afghans who said they had worked for the Aga Khan Foundation, War Child Canada and others.

The NGO workers said they were not being prioritized by the Canadian government, which was concerned instead with former employees of Canada’s military.

Development programs represented Canadian soft power in Afghanistan and were a complementary and equally important part of the international effort to stabilize the country.

Canada provided $3.6 billion in development assistance following the 2001 overthrow of the Taliban, which had provided a safe haven to Al Qaeda in the build-up to the 9/11 attacks.

But NGOs that were funded by Canada and worked on issues such as women’s rights and education said the return of the Taliban had left their Afghan employees in danger.

Canadian Women for Women in Afghanistan (CW4WA) said it had 25 staff in Afghanistan, but only two had been able to leave. One arrived in Canada, and another made it to in Pakistan.

The cases of four others were still being processed, but most staff had heard nothing from the government, said Lauryn Oates, the Calgary-based group’s executive director.

“It hasn’t given us a lot of faith in the way this is being managed and the response of the government to people who are at very, very real risk,” she said.

“These are people in very precarious positions, people who are hiding out and are worried about how much longer they can stay in the country.”

She said her staff worked on programs that were “inescapably associated” with Canada, and they had appeared in the news media and at public events.

“And now they’re at risk because of that, and so I think Canada needs to stand by people and make sure they help bring them to safety.”

The Afghan resettlement program announced by the government has two streams — one for those who worked for the Canadian military, and a second humanitarian program for human rights and women’s activists.

But according to non-profit groups, the Liberal government recently changed the eligibility requirements for the humanitarian resettlement program so that only Afghans “outside of Canada” may apply.

They also said Afghans can no longer apply directly, but must be referred by the United Nations or other approved agencies.

The Afghan Ambassador to Ottawa, Hassan Soroosh, urged Canada to expedite the processing and evacuation of vulnerable Afghans.

Canada’s new Immigration Minister, Sean Fraser, told Global News on Wednesday he was “looking forward to getting a little bit more information this afternoon so that we can start to put wheels in motion.”

Meanwhile, staff at several non-profits told Global News they remained stranded inside Afghanistan and expressed frustration at the slow pace of their Canadian immigration cases.

They also urged the government to find ways to get them out of Afghanistan, either by resuming extraction flights or by convincing neighbouring countries like Pakistan to let them in.

Ibrahimi said he thought that those who supported Canada’s development projects would be prioritized for evacuation.

“But most of us, including me, are still waiting,” he said.

He was certain the Taliban would view him with suspicion if they questioned him and learned the name of his employer.

He said Immigration, Refugees and Citizenship Canada had not provided any update on his case since August.

“We still haven’t heard anything back from them,” said Ibrahimi.

“That is where I am seeing a very, very slow uptake or process in getting application offers,” she said. “And that’s where we are finding that there is a backlog in approvals.”

In his office inside a Kabul compound protected by coiled razor wire, Mohammad Fahiq Tahiri said he felt exposed because of his work advancing women’s rights and sheltering women who were victims of violence.

“The risks are increasing day-by-day,” said Tahiri, program director at the Afghan Women’s Skills Development Centre, which is partly funded by the Canadian government.

He said he had received an email telling him his case had been approved by Canadian immigration. But he was supposed to go to a Canadian embassy in another country to get his visa, which is next to impossible.

“Unfortunately we are still in Kabul, and we don’t have any way to escape,” he said.

The journey out to Pakistan was harrowing for Basir Bita, who said in an interview the Taliban beat him after searching his phone and finding he had deleted his social media accounts, which they found suspicious.

A late afternoon rain was beating down when a heavy gate opened to a carport, and Bita emerged from the building in Islamabad that where he was waiting for approval to go to Canada.

The security was for good reason.

Bita once donned a blue burka and marched through the streets of Kabul, part of a protest by Afghan men against imposing the head-to-toe garments on the country’s women.

Later, he worked at the Kabul office of Canadian Women for Women in Afghanistan.

On Aug. 15, he was in a meeting at the office of a Kabul peace group when, one by one, the participants got up and left.

It puzzled him until his father phoned and said the Taliban were in the streets.

He biked home through a city transforming before his eyes — shops closing, people looking scared, the progress of the past two decades retreating. It persuaded him to get out.

“Within just one hour you could see a deep transition,” Bita said.

Accepted to come to Canada, he was told to go to Kabul airport, but there were so many people trying to escape, it was chaos.

He return seven times, including on the day an ISIS-K suicide bomber struck.

He said he met Canadian soldiers near the airport and showed them his documentation, but they said they could only help Canadian passport holders.

Instead, he went north to Mazar-e-Sharif, where Canadian Women for Women in Afghanistan had booked him on a flight to Pakistan. But when he tried to get to the airport, the Taliban intercepted him and sent him away.

When he returned later, his taxi was stopped, and the driver was beaten with a stick, Bita said.

A third attempt the next day was also unsuccessful. The Taliban wanted confirmation he was permitted to leave.

After six days in Mazar-e-Sharif, he tried again. He recalled the Taliban looking at his ID and asking him why he was leaving Afghanistan.

“I’m fleeing because of you,” he said he told them.

He was finally able to leave on a United Nations plane with 15 people on board. But he said he was worried about his colleagues left behind.

“The rest are still in Kabul,” he said. “I feel frustrated because they are still there.”

Bita’s hopes for Afghanistan have been shattered, he said. A non-violence and peace institute he planned to open was on hold, he said.

He called the return of the Taliban “horrible,” and said while he would like to go back to Afghanistan one day, he couldn’t say when.

“We are still waking up from a nightmare.”

‘We Are Fighting For the Survival of Humanity’

UK may become first to prescribe e-cigarettes to smoking addicts

OPEC countries are producing less oil than they said they…