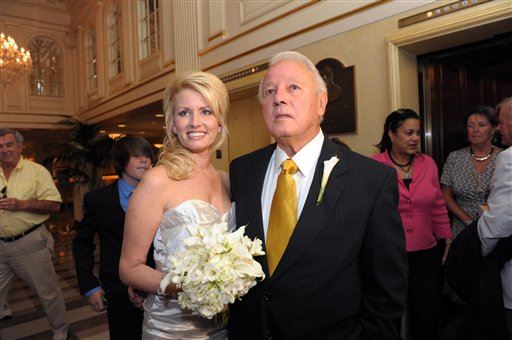 (Newser)
–
In July, former Louisiana Gov. Edwin Edwards was laid to rest in a Baton Rouge cemetery after a funeral procession through the city. His three oldest children aren’t happy about the fact that his third wife had him dug up and cremated 10 weeks later. His oldest child, Anna Edwards, tells the Advocate that she was “astonished and horrified” when she was informed of the move in a text message. She says she spoke to her father about death and burial many times over the years, and “he did not like the idea of being cremated. He thought it was abominable.”


Stephen Edwards says his father, who served as a Navy pilot toward the end of World War II, had told him he wanted his final resting place to be Port Hudson National Cemetery. He says his father was among the “large group of Christians” who believe the souls of cremated people can’t go to heaven. Edwards’ adult children are decades older than widow Trina Edwards, who married him in 2011, when she was 32 and he was 83. She was his prison pen pal while he was serving time for corruption involving riverboat gambling licenses. She said this week that the former governor’s ashes are now on her nightstand. ” I just decided I wanted to bring him home,” Trina said.


She says the decision was the best move for her and Eli, the ex-governor’s 8-year-old son, and she plans to eventually have the ashes interred in a public place, possibly in gardens facing the state Capitol. The Democrat served a record four terms as governor between 1972 and 1996. Trina Edwards says she discussed the move with David Edwards, the fourth child from the governor’s first marriage, and he told her nobody was opposed. The governor’s three eldest children have also accused his widow of excluding them from funeral plans and not reserving seats for them at the service, the Washington Post reports.


She tells the Advocate that the Baton Rouge resting place was always meant to be temporary, and Edwards had told her, “As my surviving widow it is up to you to decide what happens after I die.” She says she wishes the Edwards children peace and happiness—and she doesn’t want to dishonor her husband’s memory by letting them drag her into a “public fight.” (Read more Edwin Edwards stories.)

Coldplay sets ‘Music of the Spheres’ world tour for 2022

Households with children THREE times as likely to have a…