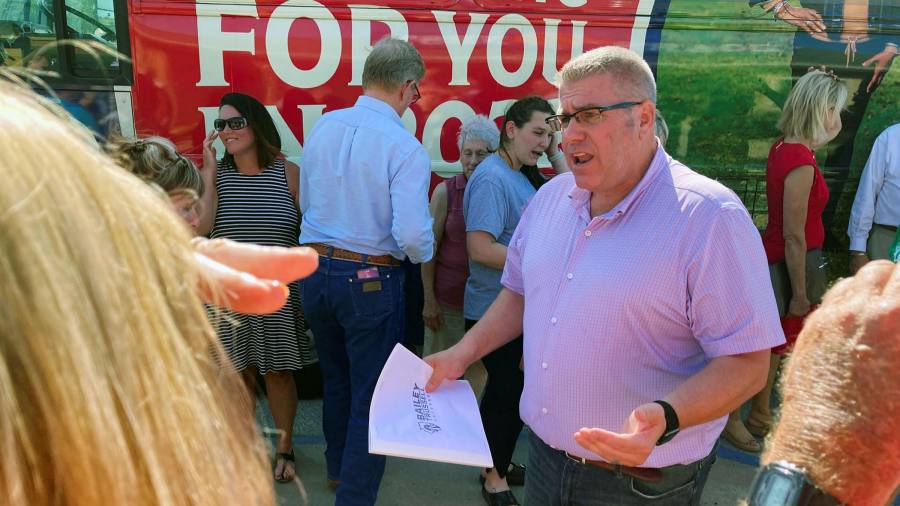 Darren Bailey, a rightwing state senator who has been backed by one of his party’s richest donors, has won the Republican nomination to run for governor of Illinois later this year, setting up what could be the most expensive gubernatorial race in US history.

“We were outspent but we were not outworked, and we won,” Bailey said during his victory speech.

Bailey, who was also endorsed by former president Donald Trump, will take on JB Pritzker, the Democratic incumbent, who is an heir to the Hyatt hotel fortune, in November.

Experts say the outcome of November’s election could come down to who can raise and spend more money. Bailey has already raised $9mn from Uihlein, while Pritzker has spent $125mn of his own money on his campaign.

“Billionaires like Pritzker can’t relate to the struggles of working people and taxpayers like us,” Bailey said.

Griffin, who announced last week that Citadel’s headquarters will move from Miami to Chicago, had backed Irvin to the tune of $50mn.

“I am proud to have supported Richard’s campaign and will continue to support candidates in elections across America who champion education, public safety and economic opportunity and who put the interests of the people first,” he said in a statement Tuesday night.

OpenSecrets, which tracks money in US politics, says the race is on track to become the most expensive election for an American governor ever. Even Democrats spent money in support of Bailey, considering him an easier candidate for Pritzker to beat.

Uihlein has emerged in recent years as a major Republican donor, contributing more to the party’s candidates in the 2022 electoral cycle than any other party backer.

He came to the fore as a staunch Trump backer and was one of the biggest funders of the January 6 rally that preceded the deadly Capitol Hill riot.

Bailey’s win underlines Uihlein’s power within the party and bolsters Trump’s position at an otherwise perilous time for the former president.

Trump is also facing more scrutiny for his role in last year’s attack on the US Capitol, after Cassidy Hutchinson, a senior White House aide, testified that the former president tried to join marchers as they made their way towards Congress.

November’s election is also likely to prove one of the biggest tests of how much Democratic voters are being motivated to turn out by the Supreme Court decision to overturn Roe vs Wade.

Bailey has strong anti-abortion views, while Pritzker spent the last weekend attending Chicago’s Pride parade and reaffirming his commitment to preserving abortion access in Illinois, setting the stage for a cultural debate that will probably dominate the general election.

The state is becoming an abortion safe haven in the Midwest since the Supreme Court’s decision, with every neighbouring state having already banned abortion or expected to do so soon.

In his victory speech, Bailey also hit out at Pritzker for recent corporate relocations, saying that “Boeing, Caterpillar and others” are being forced “to flee Chicago and Illinois”, sketching out another general election theme.

And after calling Chicago a “hellhole” earlier in the race, Bailey pivoted immediately towards courting Chicago-area voters: “let’s hear it for Chicago tonight”, he said.

Petrol should be 25p a litre cheaper say MPs as campaigners…

Anderson twins still lean on each other in pitching careers

Bookplates, a Vanishing and Nuclear-Strength Charisma

Trump, Garland and the FBI