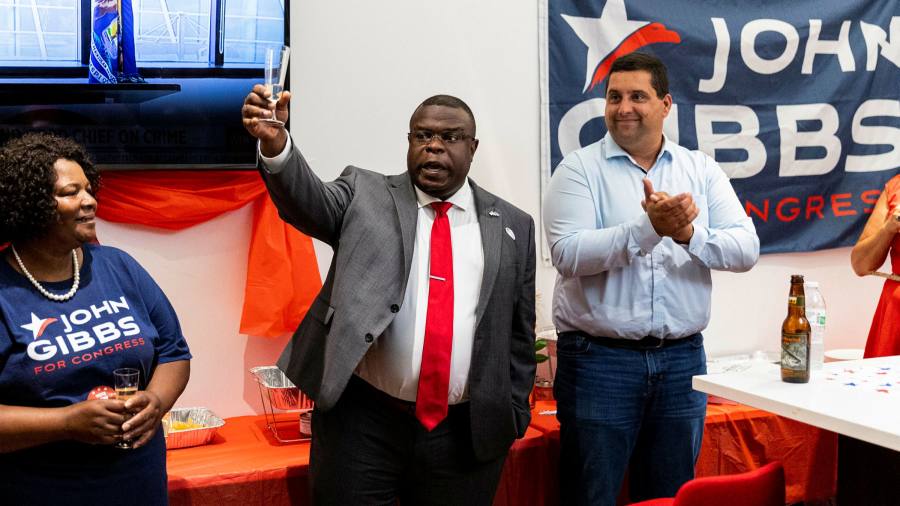 Several candidates endorsed by Donald Trump prevailed in their Republican primaries across five US states on Tuesday, highlighting the former president’s continued grip on some corners of the GOP.

In Michigan, former Trump administration official John Gibbs ousted incumbent Republican congressman Peter Meijer, following an endorsement by his former employer and outside spending by Democrats. Meijer voted last year to impeach Trump over the January 6 attack on the US Capitol.

In Missouri, state attorney-general Eric Schmitt, who had backed a lawsuit to overturn the 2020 US election results and was one of two candidates endorsed by Trump in the race, prevailed in his contest for a Senate seat.

Meanwhile, in Arizona, where ballots were still being counted, two Republican candidates backed by Trump for governor and Senate were still in the running to take on Democrat opponents later this year.

In the state’s Senate race, Trump had endorsed Blake Masters, a former employee of billionaire Peter Thiel whose candidacy has received a large financial boost from his former tech employer.

In the Arizona governor’s race, Trump endorsed Kari Lake, a former TV presenter who shares his claims that the 2020 election was stolen. Lake, who was previously a Democrat, claimed victory in the state primary on Tuesday night despite votes still being counted.

Many in the Republican establishment, including Trump’s former vice-president, Mike Pence, have backed Karrin Taylor Robson as their candidate for governor. Robson has declined to say whether the 2020 vote was stolen or not, but has not gone as far as endorsing Trump’s allegations.

Mark Finchem, the Trump-endorsed candidate for Arizona secretary of state and a vocal denier of the 2020 election outcome, secured the GOP’s nomination for a position that would give him oversight of state voting.

Trump has endorsed more than 200 candidates in this year’s Republican primaries across high-profile governor, Senate and House races, as well local state contests.

While a few of the president’s candidates have flopped — including former senator David Perdue in Georgia — many have prevailed in some of the country’s most contested races, although some are now struggling in polls and with fundraising.

In the Missouri Senate race, Trump appeared to endorse two candidates. He said in a statement he supported “Eric”, but did not specify whether it was Eric Greitens, the controversial former governor who resigned from office in 2018 amid misconduct allegations, or the former attorney-general Eric Schmitt.

While some in Trump’s circles, including future daughter-in-law Kimberly Guilfoyle, had strongly urged Trump to endorse Greitens, others close to the president warned that this nomination could put a safe Republican seat in jeopardy.

In many of the Republican primaries, Trump has put an emphasis on endorsing candidates who have publicly backed his false claim that his re-election campaign was stolen or fraudulent, and punishing those candidates who have not, such as Meijer in Michigan.

Democrats also spent money to back Trump’s candidate in the Michigan race, believing they stand a better chance of winning back that district in a matchup against the more rightwing Gibbs.

Lorna Romero Ferguson, an Arizona GOP strategist, said the continued focus on the 2020 presidential election could backfire on some of those candidates in a state such as Arizona, as the party pivots towards the general election.

“In order to win statewide, Republicans need to broaden their messaging to attract more voters such as moderate Republicans and independents who lean Republican,” she said, noting that Mark Kelly, the state’s Democratic senator who is up for re-election, and had “been on TV for months with ads focused on the economy, bringing down gas prices, and supporting funding for police”.

Republicans “just need to focus on the issues that really matter to voters”, she said.

Choco Taco lives! Klondike looks to bring back treat ‘in the coming years’