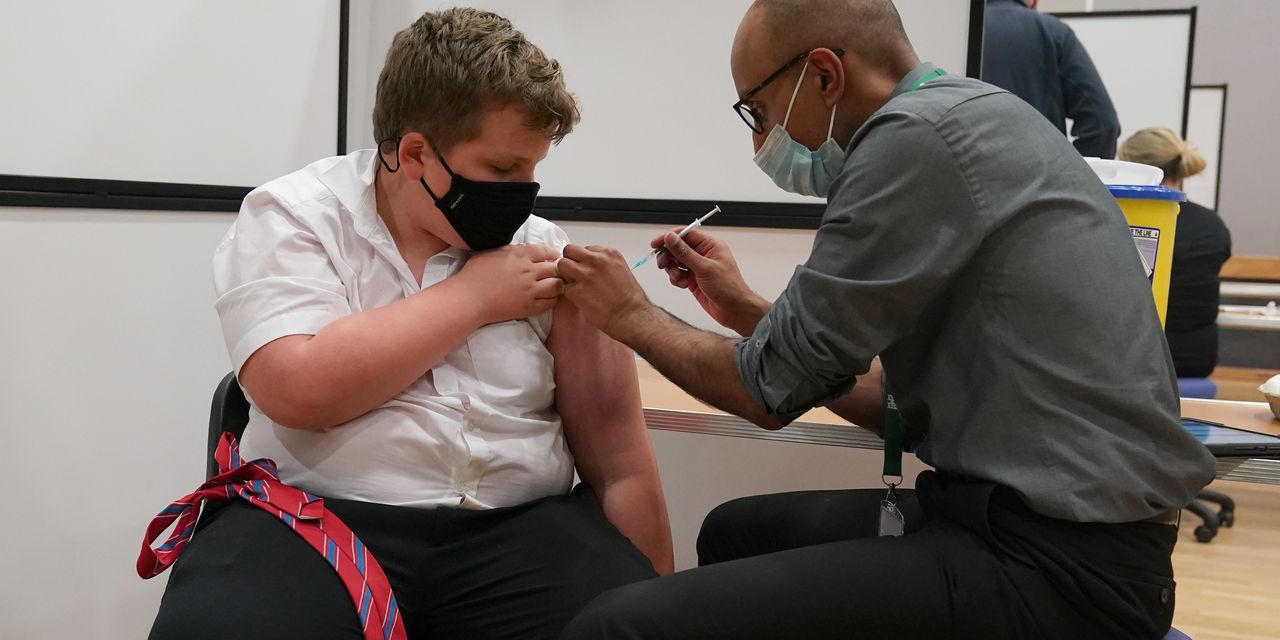 Covid-19 Cases Rise in U.K. Schoolchildren, Whom the Nation Hesitated to Vaccinate

LONDON—Coronavirus infections among schoolchildren in the U.K. have pushed daily caseloads to stubbornly high levels, a setback that underscores how Britain now trails many of its European neighbors on vaccination after staking out an early lead.

The U.K. began vaccinating teenagers in August, far later than in the U.S. and Europe, and decided to drop almost all public-health restrictions during the summer, amid optimism that vaccines had checked the fast-spreading Delta variant.

But now the country is in the midst of a swell in Covid-19, driven by school-age cases, that is showing few signs of abating, defying the familiar pattern of peaks and troughs that has marked previous phases of the pandemic.

With winter approaching, the government is racing to extend vaccination to school-age children and get booster shots to vulnerable adults to reduce the risk the virus spills over into older age groups and causes another wave of sickness and death. The protection from vaccines and the young age of many of those recently infected has meant hospitalizations and deaths, though higher than elsewhere in Europe, have so far stayed at a fraction of the levels witnessed earlier in the pandemic.

Some scientists say the unusually persistent pattern of infection in the U.K. right now might offer a foretaste of a future in which Covid-19 is ever-present in the background, causing mild infections in most people and severe illness in an unlucky few, much like influenza.

“Maybe this is normality now,” said

professor of emerging infectious diseases at the London School of Hygiene and Tropical Medicine.

Caseloads, hospital admissions and deaths are much lower elsewhere in Europe, and are broadly in a phase of decline. Many European countries have overtaken the U.K. in vaccination coverage, and most continue to adhere to public-health measures such as social distancing that Britain has largely abandoned, while adopting vaccine mandates that it hasn’t applied.

Over the seven days through Wednesday, daily Covid-19 deaths averaged 41 in France and 55 in Germany, compared with 112 in the U.K. Daily deaths in the U.S. averaged 1,700, more than three times the rate in the U.K. after adjusting for population.

Driving the current phase of the epidemic in Britain are infections among school-age children, who were last in line for vaccination. Data shows 38% of recent infections in England are among those ages 10 to 19. The Office for National Statistics estimates 8% of all high-school students in England had the virus in early October—the highest of any age group.

In France, by contrast, where more children are vaccinated and some control measures are still in place in schools, rates of infection among children have been declining. In the seven days that ended Oct. 4, about 46 children under the age of 10 per 100,000 tested positive for the coronavirus, down 63% from the incidence on the first day of school in early September. Among children ages 10 to 19, the incidence rate fell 71% in that period, to 57 per 100,000.

In much of the U.K., control measures in schools such as mask-wearing and isolation for close contacts of an infected person have been relaxed. Vaccinating 16- and 17-year-olds began in August, far later than in the U.S. and most countries in Europe, and 12- to 15-year-olds started receiving shots last month.

Scientists advising the government on the vaccine rollout were against vaccinating teenagers because of their low risk of getting seriously ill with Covid-19. They were included in the vaccine program after the country’s senior medical officers concluded they faced additional health risks from losing out on schooling.

Most school-age children in Britain are getting a single dose of vaccine, reflecting concern over rare side effects. Fewer than 15% of those 17 and younger are fully vaccinated.

In France, 67% of children between the ages of 12 and 17 are fully vaccinated. In Portugal, the figure is 82%. Spain has fully vaccinated more than three-quarters of 12- to 19-year-olds. Italy has vaccinated 62% of the same age group.

“The problem is the big, big numbers are in school-age pupils,” said

professor of public health at the University of Edinburgh.

The U.K.’s hesitancy over vaccinating schoolchildren has meant several European neighbors have overtaken it in the share of their populations fully vaccinated, according to data from the European Center for Disease Prevention and Control and the University of Oxford’s Our World in Data project.

In the U.S., 56% of the population is fully vaccinated, according to the Centers for Disease Control and Prevention.

Though the U.K. is experiencing high and persistent caseloads, the trend in hospital admissions and deaths is more positive, highlighting the effect of vaccines at limiting severe illness and the young age of most of those infected.

Admissions have been falling since early September and deaths since the middle of that month. Daily admissions peaked at around 1,000, lower than the 4,200 a day experienced in the deadlier Covid-19 wave in January, and are currently around 700 a day. Daily deaths reached more than 1,200 in January. The latest seven-day average of new deaths in the U.K. is 110.

That is above the level of daily deaths from Covid-19 recorded in most countries in Europe.

professor of medicine at the University of East Anglia, said waning immunity after vaccination might help explain the number of severe cases, since the U.K. started vaccinating its elderly and vulnerable populations before its neighbors. The U.K. and other European countries have begun administering booster shots ahead of winter, to combat the risk that dwindling immunity leads to a pickup in severe illness.

Prof. Hunter said weakening immunity means it is reasonable to expect the coronavirus will continue to cause infections as the pandemic recedes. But over time, and absent the emergence of a more virulent variant of the virus that can evade immunity, the proportion of severe cases should diminish as more people face repeated exposure over time. Coronaviruses that cause common colds infect thousands of people a day, but rarely seriously.

“Once you’ve got some immunity, when you get it another time you are less likely to get severely ill,” he said.