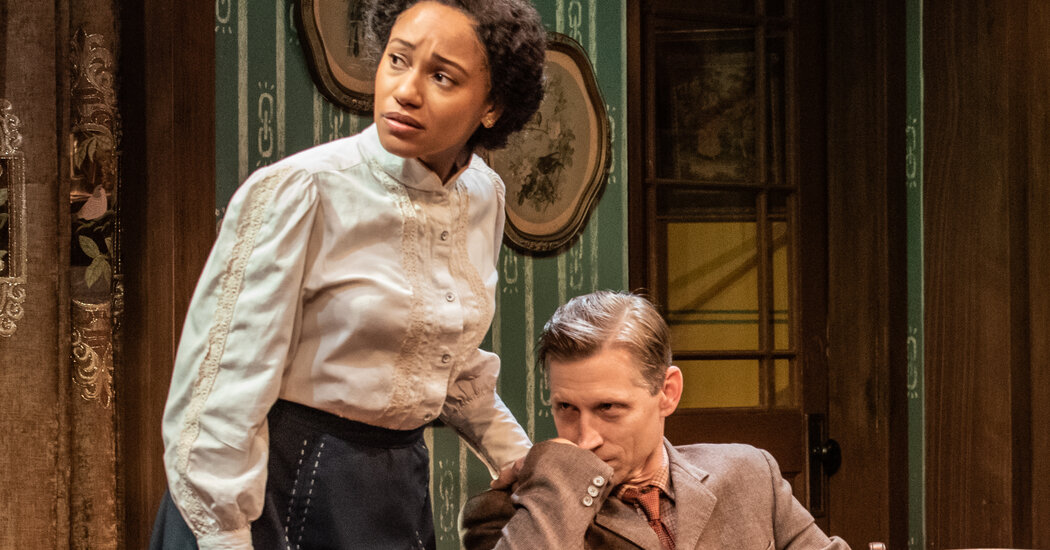 On a Saturday afternoon in April, warm sunshine streams through the French doors of Lily and Charley Wilson’s rented London house, with its modest garden just outside. A comfortable home, it’s a bit of a stretch for their budget, so they have a boarder — Fred Tennant, a pleasant young clerk.

And Fred, it turns out, has news that will send shock waves through the Wilsons’ peaceful marriage and the contented, conformist lives of their extended family. With two days’ notice, Fred is leaving England for Australia, trading the security of his office job for the risk of adventure in a new, wide-open country.

“I’m going to chance it, you know,” he says. “There’s no fortune waiting for me.”

To 21st-century American ears, that sounds like nothing to get flustered about. But in the early 20th-century England of Elizabeth Baker’s play “Chains,” which made a splash when it was first produced in London in 1909, Fred is nothing short of a social rebel, tossing away a sure thing to scratch the itch of his restlessness and — heaven forfend — pursue some happiness.

“You don’t come into the world to have pleasure,” Lily’s mother says, scandalized.

Baker argues otherwise in this well-constructed drama, which beneath its placid surface is as political as any play by George Bernard Shaw — one of her apparent inspirations — but without his dense, intrusive speechifying.

In Jenn Thompson’s beautifully acted production for the Mint Theater Company, at Theater Row in Manhattan, the love between Lily (Laakan McHardy) and Charley (Jeremy Beck) is unambiguous. But Fred’s decision unleashes Charley’s anger at his drab, deskbound life, and his regret at having settled down before he saw the world.

Trouble is, the country that Fred (Peterson Townsend) is headed to had, in 1909, a law called the Immigration Restriction Act, also known as the White Australia policy, which made it exponentially more difficult for nonwhite immigrants to be allowed into the country.

There is no mention of the law in the text, but it would be a reality for any Black migrant. So with a Black actor as Fred — giving a perfectly lovely performance — we are seemingly meant to look past his race, in a way that makes the casting read as colorblind rather than color-conscious, the philosophy that the Mint says it had in mind. Unless we’re intended to think that Fred has done very minimal research before embarking?

On a nimble set by John McDermott, flatteringly lit by Paul Miller, the action of the play unfolds in under 48 hours, which Baker gives a cheating urgency: When Charley is seized by the temptation to upend his own life and set out for Australia, leaving Lily behind, it’s as if the boat Fred is taking is Charley’s sole chance.

They are not the only ones fed up with their jobs. Lily’s sister, Maggie (Olivia Gilliatt), is so tired of working in a shop that she’s gotten engaged to a man she does not love, whose comfortable income will let her stay at home and even have a servant.

Her fiancé (Ned Noyes) dotes on her, which turns out not to be what she needs. Fred’s courage thrills and inspires Maggie. She wants a man brave enough to seek his fortune. And she wants to be brave enough herself not to do what society expects of her.

Baker, an office worker turned playwright, had some of that daring herself, going into a line of work not known to be welcoming to women. When New York audiences first saw “Chains,” on Broadway in 1912 in an Americanized version, the script was credited in all capital letters to the adapter, Porter Emerson Browne. Baker’s name appeared “in very small type,” according to the review in The New York Times, which accused Browne of “the attempted stealing of her thunder.”

Calling Baker’s play “exceedingly clever,” and praising the performances, that review deemed “Chains” nonetheless “something too familiar to create any great excitement with our playgoers.”

That’s still true. It is diverting. It’s just not especially resonant in the here and now.