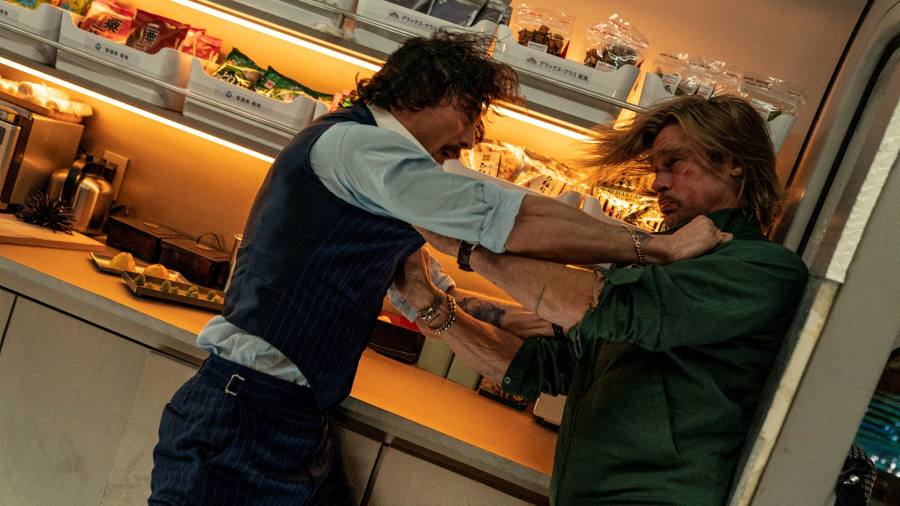 British film-goers in need of escapism will surely feel an instant pull towards Bullet Train. Amid a summer of strike action, here is a slapstick action-thriller set on a national railway that actually runs. The movie unfolds on the Shinkansen to Kyoto, adapted from the novel Maria Beetle by Japanese crime writer Kōtarō Isaka, in which a grab-bag of assassins do battle for a briefcase of ransom money.

Aside from the location and the backing of Sony, only a thin, uneasy cultural identity remains. There are nods to anime, an odd joke about wasabi, a whole sequence centred on a “washlet” toilet. But the headline cast have been hired for western tastes, led by Brad Pitt as a hapless career criminal on a seemingly straightforward mission. Board at Tokyo, retrieve case, exit. Afterwards he plans to visit a Zen garden.

Sadly, nothing is ever so simple. The train proves to be filled with other bad guys, each a cartoon cog in an ornate plot that builds to a comic free-for-all. Britishness comes to the fore with a pair of cockney goons played by Brian Tyree Henry and Aaron Taylor-Johnson. Henry’s wrestle with the accent is among the most compelling things in the movie. Taylor-Johnson at least has fun mimicking Tom Hardy in a film that in turn impersonates Guy Ritchie, which is to say it looks like a lager ad from 2003 and is stuffed with self-delighted banter. Between the endless jawing comes the global language of ultra-violence.

Director David Leitch is among the makers of the John Wick movies, a franchise that does flip, neon-lit bloodshed better. Still, Bullet Train must have made a great pitch, star names and mayhem in the self-contained bubble of a railway journey that has yielded the grandstand likes of Snowpiercer and Train to Busan.

The problem is the execution: meandering and free of snap. Does Leitch know that bullets are meant to move fast? If most of the actors struggle, Pitt is still an ever-watchable, nimble comic performer. His hitman arrives in a therapy haze of self-help mantras. But like every other gag, that gets worked to death. (Another running joke about British children’s TV show Thomas the Tank Engine is flogged to the point of cruelty.)

In uncertain times for film stars, Pitt had 20mn reasons to sign up anyway. Quite why Fiji wanted to be seen as the sociopath’s choice of bottled water is less apparent. Given the volume of product placement, it seems churlish not to put them in the review as well. Everyone else may want to step off before the doors close.

Opinion | What’s the Matter With Arizona?

Brittney Griner to Learn Her Fate Within Hours