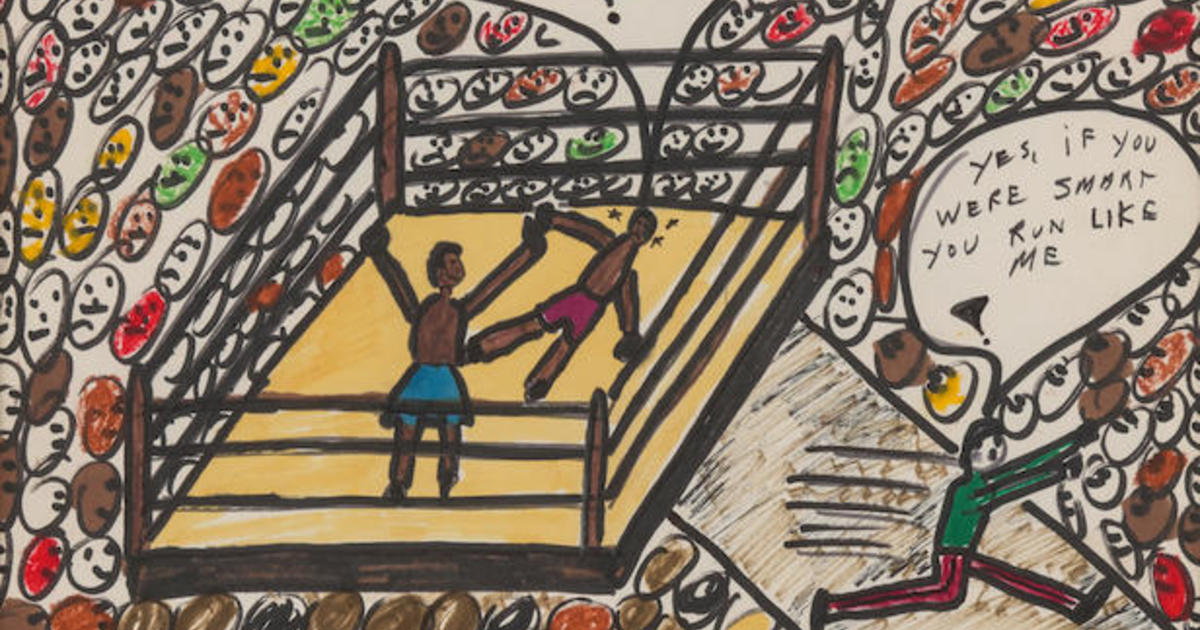 Although Muhammad Ali has been dead for five years, he’s still surprising the world. On Tuesday, 28 pieces of the legendary boxer’s artwork were put up for auction — and they fetched nearly $1 million.

Ali’s art career, which comes as a surprise to many, was due in part to his old friend Rodney Hilton Brown.

“I had taken over a failing art gallery in Soho, and I was looking for a world class famous figure that could paint some paintings that we could make limited edition prints of and sell,” Brown said.

No one was bigger in the mid-1960s than Ali. Brown approached him, and Ali was game.

“He never claimed to be a great artist,” Brown recalled. “He knew he was the greatest boxer in the world, but when it came to art, he said to me, ‘I paint pictures with meanings.'”

Two dozen of Ali’s works, auctioned off on Tuesday, reflect what the champ was thinking, not only about boxing — but also about religion, war and social justice.

“I think the thing about these works is the subject matter are all things that were close to his heart,” said Helen Hall, who works with the auction house that handled the “Who Knew?” collection. “He’d draw his boxing matches and he references Islam, references race riots that happened in the ’60s. So they’re personal works — which makes them so — well, when I first opened the box and saw them in the flesh I got goosebumps.”

The artwork fetched a high price. All but two of the 28 listed paintings sold on Tuesday, netting a total of $945,524, the auction house told CBS News. “Sting Like a Bee,” which depicts him in the ring surrounded by fans, sold for $425,312 alone.

Ali learned to paint from his father, Cassius Clay Sr., according to the auction house. The company said Ali painted and drew “informally” when he was young, before taking lessons from LeRoy Neiman.

Ali was a three-time world heavyweight boxing champion and a cultural icon. When he retired from the sport at age 39, he had a pro record of 56 wins and five defeats. He died in 2016 at age 74.

A broad range of brilliance — befitting of “the greatest.”

Denial of responsibility! Elite News is an automatic aggregator of the all world’s media. In each content, the hyperlink to the primary source is specified. All trademarks belong to their rightful owners, all materials to their authors. If you are the owner of the content and do not want us to publish your materials, please contact us by email – [email protected]. The content will be deleted within 24 hours.
Artauctionboxingislammuhammad ali
0
Share FacebookTwitterGoogle+ReddItWhatsAppPinterestEmail