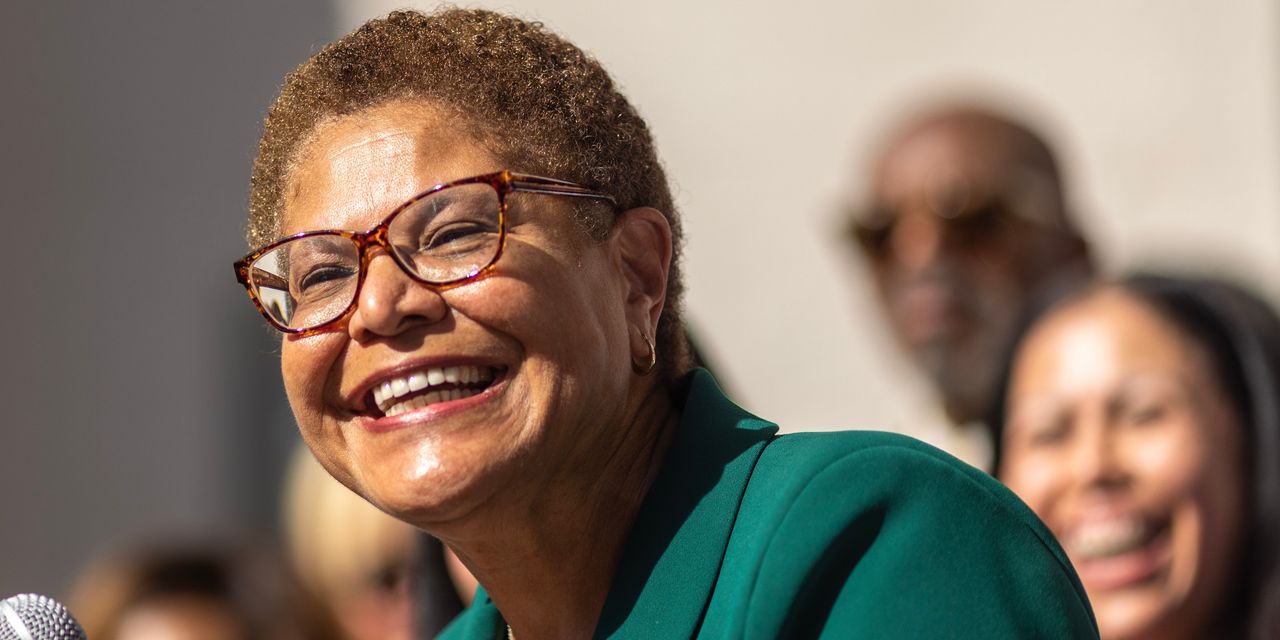 Black Mayors in the Four Biggest Cities. Is That a ‘Big Deal’?

is sworn in next month as the new mayor of Los Angeles, the nation’s four largest cities will be led by blacks simultaneously for the first time.

who took office in 2019; and Houston Mayor

who was first elected in 2015 and is now serving in his second term. Like most black voters, all four are Democrats, but liberals are celebrating more than another partisan victory.

A widely held view on the left is that racial and ethnic political clout is essential to a minority group’s economic advancement. “When you have the top four cities at the table, with the administration, I think that the conversation is definitely going to land where it needs to be,” said

CEO of the African American Mayors Association, in an interview with CNN.

the mayor of Little Rock, Ark., and president of AAMA, was similarly optimistic in his comments to Politico. “Anytime we get a new mayor, it’s exciting,” he said. “But to have another mayor, a black woman, who’s going to lead one of our nation’s major cities? That’s a big deal.”

Historically, however, more black political clout hasn’t been a big deal, if the measure is black upward mobility. Black leaders increased their focus on electing more black officials following passage of the Voting Rights Act of 1965. Since 1970, the number of black elected officials has grown from fewer than 1,500 to more than 10,000.

was elected mayor of Cleveland in 1967, the same year

won in Los Angeles and

won in Detroit. “From 1967 to 1993 blacks were elected mayor in eighty-seven cities with a population above 50,000,” the political historian

wrote in “The New Americans.”

Nearly all these black elected officials were liberal Democrats who enacted policies—higher taxes, more government spending, a larger welfare state—similar to their white counterparts. In addition, they pushed for racial quotas and set-asides for minority city contractors. Nevertheless, political integration didn’t translate into a boon for the black underclass. The well-connected did fine, but the black poor became poorer.

In Coleman Young’s Detroit, the focus was on securing federal grants to provide government jobs for black supporters. Meanwhile, crime rates exploded, the tax base fled the city, and Detroit’s population fell from about 1.5 million to less than one million on Young’s watch.

Washington in the 1980s likewise featured government preferences for minorities, bloated city payrolls, high crime and a declining population. Between the late 1960s and the early 1990s—a period that includes not only the proliferation of black elected officials but also massive expansions of the welfare state and the implementation of racial preferences—incomes for the poorest blacks fell at more than double the rate of comparable whites.

Anyone familiar with the experience of other ethnic groups, such as the Irish, won’t be surprised that black political influence—including the election of a black president—hasn’t translated into more black socioeconomic advancement.

No other ethnic group enjoyed greater political success in the U.S. than the Irish of the mid-19th through early 20th centuries. Irish political machines controlled cities in the Northeast (New York, Philadelphia), the Midwest (Chicago, Milwaukee) and the West Coast (San Francisco). Yet during this period not much of an Irish-American middle-class existed. Despite their political prowess, the Irish were the slowest to rise economically of the European ethnic groups. Notably, it wasn’t until the decline of these patronage machines beginning in the 1940s that an Irish-American middle class emerged.

“Well into the twentieth century, Irish-Americans lagged behind the national average in income and wealth,” Mr. Barone wrote. “The prevalent attitude that the larger society was illegitimate produced high crime rates and predatory political machines that worked against upward mobility and economic growth. It also produced low levels of educational achievement, which sharply limited opportunity.” Thanks largely to the efforts of nongovernment entities—the Catholic Church, temperance societies, charitable organizations—that mindset changed. Today, Irish-American poverty rates are far below the national average, while incomes are far above it.

Two centuries of enslavement and another century of Jim Crow obviously make the black experience in America unique, but that doesn’t mean no lessons can be drawn from the experiences of others. One lesson is that cultural habits can change. Another is that the development of attitudes, skills and behaviors conducive to economic advancement is far more important for lagging groups than electing people who share their racial or ethnic background.

Denial of responsibility! Elite News is an automatic aggregator of the all world’s media. In each content, the hyperlink to the primary source is specified. All trademarks belong to their rightful owners, all materials to their authors. If you are the owner of the content and do not want us to publish your materials, please contact us by email – [email protected]. The content will be deleted within 24 hours.
Black leadersC&E Executive News FiltercommentariesCommentaries/OpinionscommunityContent TypesDomestic Politicseconomic sucess
0
Share FacebookTwitterGoogle+ReddItWhatsAppPinterestEmail