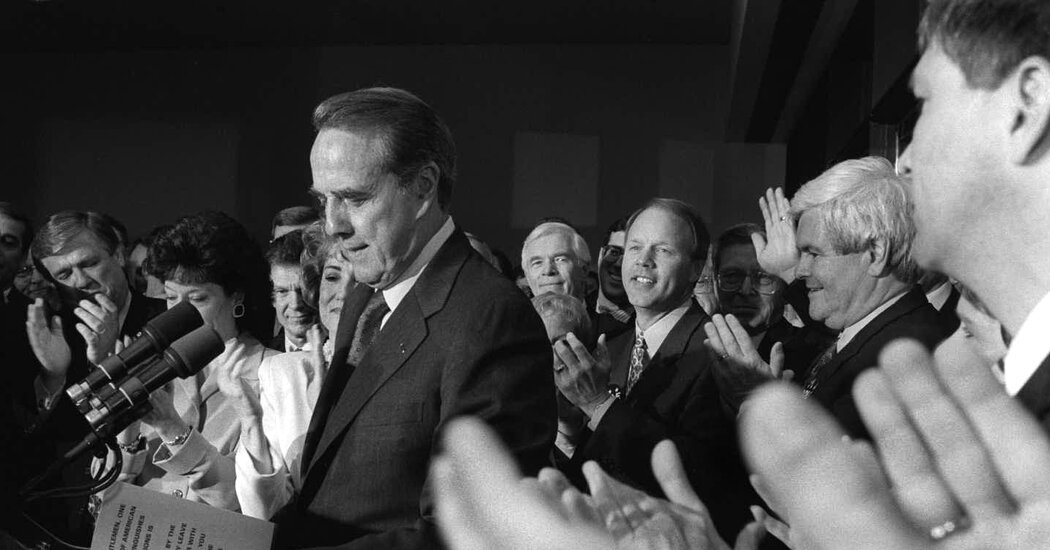 Leaders from across the political spectrum offered tributes to Bob Dole, the former Senate majority leader and Republican presidential nominee who died on Sunday, hailing him as a war hero and statesman who dedicated his life to public service.

“Bob Dole was a man to be admired by Americans,” President Biden said on Twitter. “He had an unerring sense of integrity and honor.”

Senator Mitch McConnell, the Kentucky Republican and minority leader, said in a statement that Mr. Dole’s “lifetime of service was rooted in a simple mission: looking out for his neighbors.”

That path started with serving customers at a soda fountain in Russell, Kan., and continued through his service in the Army’s 10th Mountain Division during World War II, and it was capped off by nearly 30 years in the Senate and more than a decade as the Republican leader, he said.

“His Dust Bowl roots fueled a special commitment to vulnerable Americans, and sure enough, Bob’s work on food security, veterans’ issues, and the rights of disabled Americans have continued to have an especially lasting impact,” Mr. McConnell said.

Former President Barack Obama said on Twitter that Mr. Dole’s political leadership and demeanor harked “back to a day when members of the Greatest Generation abided by a certain code, putting country over party.”

“I will always remember Bob’s salute to my late dad at the Capitol,” Mr. Bush added, referring to his father, former President George H.W. Bush, who died in 2018, “and now we Bushes salute Bob and give thanks for his life of principled service.”

Former President Bill Clinton, Mr. Dole’s opponent in the 1996 presidential contest, said on Twitter that Mr. Dole dedicated his life to serving the American people, “from his heroism in World War II to the 35 years he spent in Congress.”

“After all he gave in the war,” Mr. Clinton added, “he didn’t have to give more. But he did. His example should inspire people today and for generations to come.”

Al Franken, the Democratic former U.S. senator and comedy writer, said of Mr. Dole: “He was a war hero, one of the great senators, a lovely man, and … well, I’m finally the funniest former US senator. I’ll miss this REALLY funny man.”