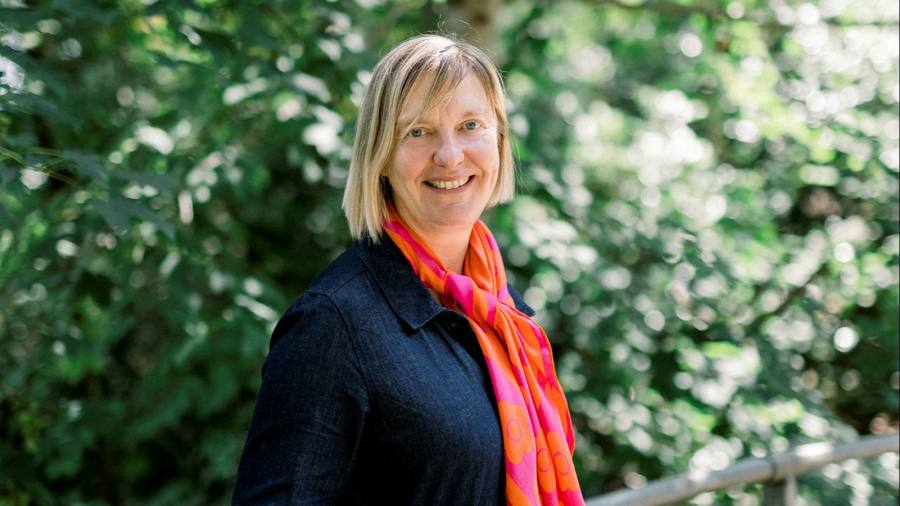 Author Charlotte Higgins: ‘Every generation has used Roman Britain as a mirror for its own anxieties’

There’s a passage in Charlotte Higgins’s 2013 book Under Another Sky that stops you in your tracks. Travelling round Britain in search of its Roman past, she comes across a fragment of letter written in Latin on a wooden tablet in about 100AD: an invitation from one woman to another to attend her birthday party.

“I give you a warm invitation to make sure that you come to us,” she writes. “To make the day more enjoyable for me by your arrival . . . Give my greetings to your husband, Cerialis. My Aelius and my little son send him their greetings too. I shall expect you, sister. Farewell, sister, my dearest soul, as I hope to prosper, and hail.” The warmth of the correspondence leaps out across the millennia: you can picture this long-gone woman, writing with such affection to her friend, and envisage the excitement of her small son at the festivities.

This tantalising sliver of domestic life now makes its way on to the outdoor stage at Pitlochry Festival Theatre in central Scotland in a dramatisation by David Greig. But that glow of intimacy might be deceptive, warns Higgins. “When you read that correspondence between Claudia Severa and Lepidina it feels like you’re there in the room with them,” says Higgins, when I talk to the two writers on Zoom. “But are you?

“The classical Greeks and the Romans have a very particular place in our culture because they have been our companions for a very long time,” she adds. “So they’ve informed a huge amount about the way we think and the way our culture has formed. They feel familiar. But that doesn’t necessarily mean that they are familiar. That tension is incredibly powerful to me.”

The dilemma is also at the heart of Higgins’ book. It’s a work as richly layered as an archaeological dig: part funny and fascinating travelogue, as she and her partner, Matthew Fox, trundle through the country in an old VW camper van, part intricate historical tapestry, part astute analysis of the complex role of the Roman past in today’s national identity. Higgins’ infectious passion for her subject is tempered by the keen awareness that the “Roman Britain” she encounters is a subjective interpretation.

“Our relationship with the past is absolutely contingent on us and where we are,” she says. “Every generation has used Roman Britain as a kind of mirror to play out its own anxieties about identity, about nationhood, about empire and power.”

In Greig’s hands, that complex tangle acquires yet another layer. The playwright has dramatised Higgins’s journey, mischievously fictionalising the writer and her partner. The result, part romcom, part road movie — “it’s more Before Sunrise than Thelma & Louise”, says Higgins — bakes the issues of the book into the dramatic structure: Higgins finds herself reimagined by another.

“Maybe it’s the universe’s revenge on a journalist to see oneself creatively misrepresented,” she protests, jokingly (Higgins is chief culture writer at The Guardian newspaper). “David keeps apologising for the fact that Charlotte in the play is not very good with deadlines. Charlotte in real life, I would like to make clear to any future employer, is very good with deadlines . . . ”

On stage, Charlotte and Matthew — and the van, which acquires a personality of its own — bump along muddy tracks and up steep hills, shadowing the journeys taken by Roman soldiers before them. The couple re-enact a fight in an amphitheatre, dress up as legionaries, eat olives and sip wine reclining by walls where Romans would have supped before them.

Greig, like Higgins, writes about the act of writing and the way it shapes our impression of events, so demonstrating historical interpretation in action. But does the play also intensify the dilemma of the book, bringing scepticism into direct conflict with the empathy at the heart of theatre?

“My book is sort of about the impossibility of truly imagining the deep past,” agrees Higgins. “And David’s life is about imagining himself very fully into other characters. The play enjoys the roughness of that tension.”

“It’s a good discussion for drama,” says Greig. “Because drama is about imagining what someone else’s life is like. I profoundly believe in it. I’d go so far as to say that it’s central to democracy. But it’s certainly true that the way we use the past says more about ourselves.”

Greig shares Higgins’ fascination with deep history. Under Another Sky could even be seen as a companion piece to Adventures with the Painted People, which played at the same venue last year and imagined a first-century encounter between a Roman soldier and a Pictish woman. Both touch on big questions about what constitutes “civilisation”.

“This word ‘civilisation’ means to do with cities and civic life,” says Greig. “A life that is particular to classical Greece and Rome, to writing and building, roads and empires. But ‘civilisation’ meaning a cultured, complex and enjoyable way to live may have nothing to do with writing or cities. We don’t know how the people in the neolithic conducted their culture and their politics. It could have been every bit as cultured and every bit as complex.”

Threading through both book and play is the irony that the might of Rome now comes to us through ruins and fragments. The ultimate fragility of an empire that must have seemed so powerful and so permanent has haunted writers in the past and takes on a peculiarly troubling quality today.

“Look on my Works, ye Mighty, and despair!” says Greig, quoting Shelley’s poem “Ozymandias”. “That’s probably the single thing that motivates the play most: that fact that there was once something sufficiently like us that we could recognise it — cities, towns, hotels, armies, theatres — and yet it went. It makes us think about our temporariness and our contingency.”

Highly charged, too, are the examples of the ethnic complexity of Roman Britain. The play touches on the case of the Ivory Bangle Lady, a wealthy 4th-century woman with north African ancestry whose skeleton was found in York.

“It’s good to think right now about the sheer number of nationalities who were making their lives here,” says Higgins. “Syrian traders on Hadrian’s Wall. That really messes with some people’s idea of what Britain is and should be. And it needs to.”

It’s about “what we choose to see”, adds Greig. For him, it’s important to be honest about that at a time when history is so contested and plays such a prominent a role in arguments about identity, nationhood and belonging.

“This Roman Britain which we project a ‘we’ on to — those people spoke an essentially Welsh language, they identified as Roman. This was before both the Saxon and the Norman invasions, so what does that mean about this thing ‘Angle Land’, which was a Saxon name? There was no such place as Scotland when the Romans were approaching. And yet Hadrian’s Wall is unquestionably a line that has informed modern Scotland in some way. So what is this ‘we’ that you think you are? Speaking as a pro-independence Scottish person, I like the way that it challenges my easy self-narrative.”

August 10 to September 23, pitlochryfestivaltheatre.com; ‘Under Another Sky: Journeys in Roman Britain’ is published by Jonathan Cape

Save the date for Saturday, September 3 to listen to over 100 authors, scientists, politicians, chefs, artists and journalists at Kenwood House Gardens, London. Choose from 10 tents packed with ideas and inspiration and an array of perspectives, featuring everything from debates to tastings, performances and more. Book your pass at ft.com/ftwf