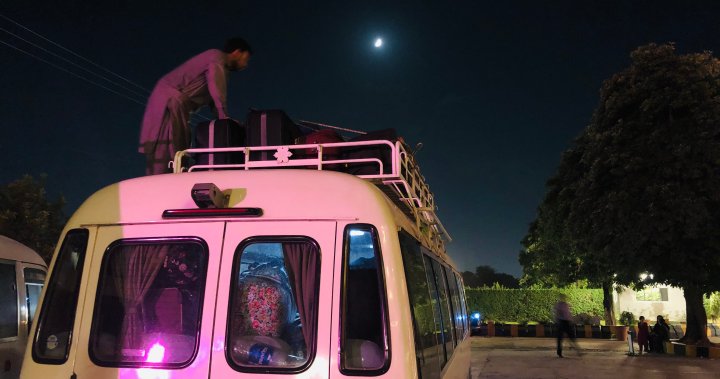 At an Islamabad hotel, Afghans who worked for Canada’s military await a new life – National

Two days before he was scheduled to board a plane for Toronto, Mohammad Ismail stood in a cramped hotel room in Islamabad, packing his belongings into a small black suitcase.

A pair of kid’s shoes were on the window ledge. Ismail bought them for his eight-year-old son, who was accompanying him to Canada, along with his wife. New shoes for a new life in a new country.

“I’m a happy man,” explained Ismail, wiry and unshaven with sunglasses perched over thick black hair. He is 35, and like many Afghans, could pass for a decade older.

But as the Afghan forces collapsed over the summer amid a U.S. military withdrawal, Taliban filled the streets, and it was hard for Ismail to stay positive.

He feared his work for the army that fought the Taliban meant he would never feel safe, so he turned to the Canadians he had once protected to see if they might return the favor.

Day after day, he stood in a filthy sewage canal outside Kabul airport, shouting out his name at the international troops, telling them he was Captain Smiley and he needed help. Nobody answered.

Then in late September, a network of Canadian veterans came to the rescue. The family was loaded into an SUV at night and ferried out of Kabul in a convoy.

They crossed the border into Pakistan, to an Islamabad hotel where Afghans who worked for the Canadian Forces as interpreters, plumbers, mechanics, cooks and drivers, were waiting to come to Canada.

The piano muzak pumping into the atrium echoed around marble columns and floors as Afghan men checked their phones for updates on their immigration cases.

They lingered in the lobby, their kids darting around them. They tried to imagine the Canada that awaited them. And they shared stories from home about Taliban vengeance.

Ismail said the Taliban had come to his house three times since he fled Kandahar, but the elderly woman who now lives there covered for him, saying he was in the north on business.

Because of their work for Canada, the Afghans were convinced they would not be alive had they stayed home, and they worried that, if their immigration papers didn’t come soon, they would be sent back to an Afghanistan run by militants who view them as enemy collaborators.

But they also knew they were the lucky ones.

Hundreds like them remain in Afghanistan, holed up in a handful of Kabul safe houses operated by a consortium of non-profit groups run by Canadian military veterans.

The veterans said they were in contact with more than 10,000 Afghans who had applied to come to Canada under the federal government’s special immigration program.

Since Canada ended evacuation flights in August, the veterans have been able to extract a few hundred of them, but 1,700 remain in Kabul safe houses.

“They don’t have a route out at the moment,” said Tim Laidler, who served in Afghanistan and now heads the Veterans Transition Network, one of the groups helping the Afghans.

Either they lack approval from Canadian immigration authorities, or they have it but can’t leave Afghanistan because they don’t have a passport, a requirement for entry into Pakistan, he said.

“It’s been tough to get people out of the city,” said Laidler, whose organization is supported by donations.

He said the government needed to act soon.

“This is not a safe place for people to stay long term. We can’t just slowly go through a regular immigration process. We need to move very quickly while there’s an opportunity to get as many people out as possible,” he said.

“We know that people have been targeted, and every day there’s new people being killed in Afghanistan.”

The Liberal government has vowed to resettle 40,000 Afghan refugees through a special immigration program. Immigration, Refugees and Citizenship Canada said it was working day and night to process applications, and 9,400 had been approved.

But only a quarter of those have made it to Canada.

“The most significant challenge is the extreme volatility of the situation on the ground, and ever-changing circumstances around documentation required at checkpoints and international crossings, which make it exceedingly difficult to get Afghan refugees safely out of the country now that it is under the control of the Taliban,” said spokesperson Peter Liang.

Several Afghans who worked for the Canadian forces told Global News their families had been targeted.

A former interpreter for the Canadian Armed Forces in Kandahar, Naseer Khwaja fled Afghanistan for Edmonton before the Taliban seized the country in August.

His brother wasn’t so lucky.

On Aug. 15, the Taliban abducted Khwaja’s brother Mohammed, who had worked as an interpreter for the U.S. and British forces, and more recently as an airport security worker in Kandahar.

“He was taken from the home by three of the Taliban,” Khwaja said.

A few hours later, the family heard an explosion and saw smoke rising from behind their home. An announcement from the mosque said a body needed to be claimed.

Khwaja said the Taliban killed his brother by putting him next to an explosives-laden vehicle and detonating it. He was so badly burned they could hardly recognize him.

“My brother was targeted,” he said.

He said he had applied bring his brother’s wife and children to Canada, but said he had not received approval.

Such incidents are chilling to former employees of the Canadian Forces like “Capt. Smiley” Ismail, who commanded an Afghan security team that guarded the Canadians at their base in Kandahar, as well as on military operations.

He said the foreign troops were guests in his country, and it was his duty to keep them safe. He soon came to appreciate the Canadians, finding their values similar to his own.

He saw them helping the locals, and felt they were well-intentioned. He recalled them buying sheep and flour for families that had lost loved ones.

“I saw a lot of good things from the Canadian side,” he said.

He also disagreed with the Taliban’s ultra-conservative doctrine, which forbids girls from going to school and confines women to their homes.

The Canadians appreciated him too. One of Ismail’s photos from his time with the Canadian Forces shows him with Gen. Jonathan Vance, the former chief of defence staff.

A half-dozen commendations and certificates praise Ismail’s “positive and friendly attitude,” and “professionalism and dedication,” and call him a “valued and respected member” of the Kandahar Provincial Reconstruction Team security detail.

After the Canadian mission ended, Ismail said he bought and sold cars. In 2018, he went to Kabul to apply to immigrate to Canada, but he said the embassy guards turned him away, telling him the process was closed.

As the Taliban captured Kandahar last summer, he tried again, emailing Immigration, Refugees and Citizenship Canada. This time he was accepted, and was told to travel to Kabul.

The city was in chaos when he arrived. He couldn’t get close to the airport. All he could do was join the desperate crowds trying to get on a flight.

As the Afghans massed around the airport, Canadian veterans received messages from them. They were standing in sewage water, begging to be evacuated, Laidler said.

“It’s heartbreaking for veterans to watch,” he said.

“And it was all the veterans who we had been working with from across Canada who were calling us, saying we need to do something, because everybody was getting these calls and text messages and Facebook notifications saying that their interpreters were trapped and struggling and needed help.”

Unable to fly out, Ismail retreated to his safe house, but in late September, the veterans network told him to get ready, they were taking him out.

After dark, a convoy picked up his family and they left Kabul. They stopped in Jalalabad for the night and reached the Torkham border, where a second convoy was waiting.

After clearing Pakistani immigration and COVID screening, they drove on to the hotel in Islamabad.

At dusk on Oct. 12, Ismail came out of the hotel with his suitcase and bags. He had traded his blue kameez and sandals for black jeans and a black dress shirt.

He hugged the friends he’d made at the hotel, and helped hoist luggage onto the roof rack of a white Toyota bus.

The driver pulled out of the hotel parking lot at 7:15 p.m. On the way to the airport, Ismail was on his phone, exchanging celebratory messages with his veteran friends in Canada.

He couldn’t say what awaited him, only that it was something better. He thought he would work on his English, further his education and find a job, perhaps in security.

Mostly, he was looking forward to living in a safe country, where he wouldn’t have to worry that vengeful militants would come for him in the night.