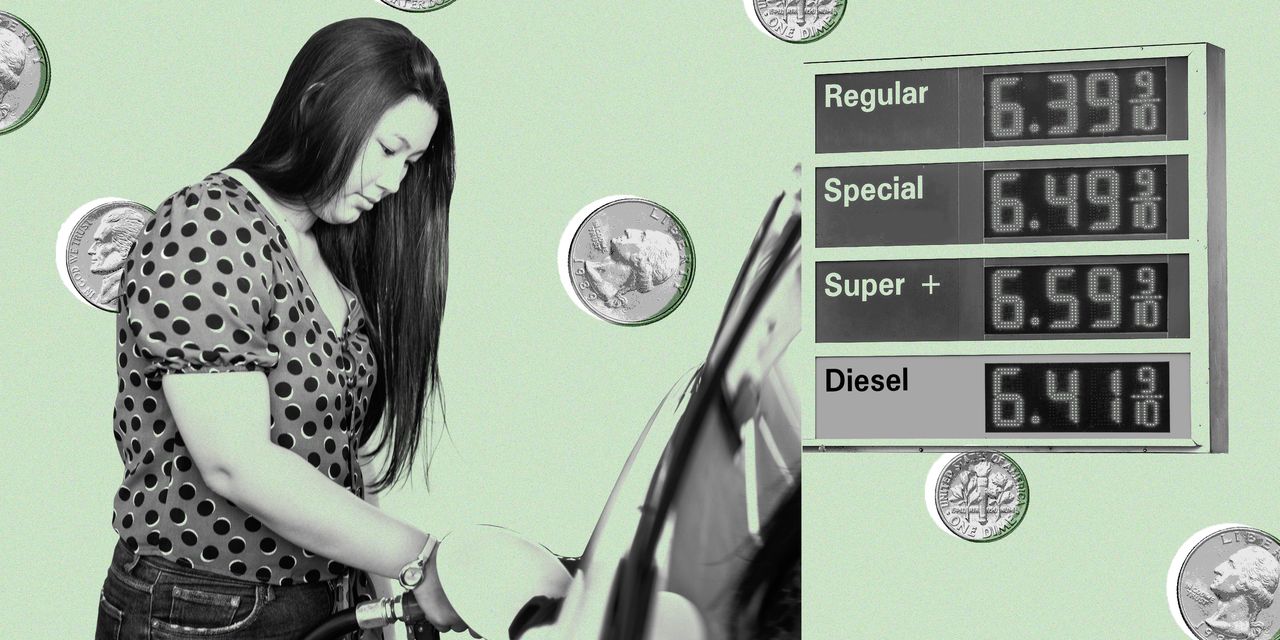 As Gasoline Prices Surge, Here Are Four Ways to Save This Summer

Rising gasoline prices are straining Americans’ wallets and adding to the costs of commuting, shopping and travel this summer.

The national average price for a gallon of gasoline topped $5 this month. It is another stress on people whose personal budgets have been stretched by the impact of inflation on the cost of groceries, housing and several other parts of daily life.

U.S. households are now spending at a pace equivalent to $5,000 annually on gasoline, up from a rate of $2,800 a year ago, according to a report by Yardeni Research, an investment consulting firm.

the head of global commodities research for J.P. Morgan, said prices could climb to more than $6 a gallon this summer.

“People are seeing the prices at the gas pump, they want to know what they can do now,” said

There are ways to shave as much as 20 to 30 cents off the price of a gallon of gasoline using store and credit-card offers. But beyond such deals, the way to make the biggest dent in your fuel bills might be to change your own behavior.

Driving more efficiently, mapping your route and even avoiding left-hand turns are some of the strategies that fuel experts, auto analysts and financial planners recommend.

Here are four strategies for cutting your fuel bill.

Stores, gasoline stations and credit-card companies offer a variety of discounts, some of which can be combined to compound the savings.

What tips do you have for reducing the pain at the pump? Join the conversation below.

senior industry analyst at Bankrate.com, recommends the Sam’s Club Mastercard, which provides 5% cash back on gasoline purchased almost anywhere. The card is capped at $6,000 a year, or a saving of 25 cents a gallon, assuming a $5-a-gallon price. He also suggests the Costco Anywhere Visa card, which gives 4% cash back on gasoline purchased almost anywhere, capped at $7,000 a year. Using the card saves 20 cents on a $5 gallon.

“The warehouse club cards are particularly compelling because Sam’s Club and Costco often sell gas that’s considerably cheaper than the competition, plus you can get added discounts by using their credit cards,” he said.

Filling stations have their own credit cards, but the rewards and interest rates often aren’t as favorable, Mr. Rossman said.

standard offer is 10 cents off a gallon, with an annual percentage rate of 27.24%.

Most of the major gasoline brands have payment apps that offer 5 cents to 10 cents off a gallon. Load a good gas-rewards credit card into the app and now you have combined two ways to save, not just one, said Mr. Rossman. For instance, with a 4% cash-back card and 10 cents off from an app, you could snag gasoline for $4.70 a gallon instead of $5.

Proper tire inflation affects your vehicle’s fuel efficiency, analysts said. Low tire pressure increases friction between the vehicle and the road, forcing the vehicle to do more work (and burn more gas). Be sure to keep all four tires inflated at the manufacturer’s recommended pressure level.

A common misconception among many consumers, analysts said, is that premium or higher-octane gasoline improves a vehicle’s fuel economy. “Really, there is no evidence of that for the majority of vehicles on the road today,” said Michael Reale, associate director of planning solutions at S&P Global Mobility. Sticking with regular-grade gas results in immediate savings.

Drivers should check and clean their engine air filter every three to six months, said Ivan Drury, senior manager of insights at Edmunds.com. A dirty filter can cause your engine to work harder to get clean air, “like drinking from a coffee straw versus a big-gulp straw,” he said, decreasing fuel economy by 1 to 3 miles per gallon.

The heavier your vehicle, the more gasoline it will burn. (That’s just physics.) Drive with an empty trunk when possible, and be mindful of vehicle modifications that would add extra weight to your ride.

The quickest and easiest way to save on gasoline is to modify driving habits, analysts say.

Drivers can start by mapping out their errands. Circumvent hills, minimize unnecessary trips and avoid situations that leave you prone to vehicle idling, which consumes one-quarter to one-half gallon of fuel an hour, said

a spokeswoman for AAA. Carpool and drive with an empty trunk when possible. The savings per gallon will vary based on the type of car, driving style and distance traveled, she said.

Additionally, left-hand turns are the enemy of your fuel tank, said

senior manager of insights at Edmunds.com.

The latest news on how to manage your money.

“There’s a light or a stop or something that will force you to sit and wait and burn gas,” he said. Mr. Drury points out that

better known as UPS, optimizes fuel costs in part by ensuring that an estimated 90% of drivers’ turns are to the right.

Too much acceleration and deceleration can also burn extra fuel. According to Mr. Reale, fuel economy suffers by more than 10% every time a vehicle’s cruising speed is increased by 10 miles an hour. Conversely, quick braking at traffic stops causes your engine to use more energy than necessary.

Use cruise control when appropriate, analysts say. A 55-mile road test by Edmunds showed an average fuel savings of 7%, and maximum savings of 14%, using cruise control. Also, try to anticipate traffic conditions so it is easier to coast to a stop, which Mr. Reale said can reduce fuel use by 5% to 10%.

Your vehicle’s “economy mode” will slow the response between throttle and acceleration, Mr. Drury added, and its instant fuel-economy readout on the dashboard can help target the ideal speed for savings.

Fuel economy generally peaks at roughly 50 miles an hour on most cars, according to Ms. Edmonds at AAA, then dwindles as speeds increase. Reducing highway speeds by 5 to 10 miles an hour can increase fuel economy by as much as 14%, the organization said.

In other words, driving with a heavy foot will result in a heavier gasoline bill.

“Unless that three minutes is incredibly critical to you, that’s an easy way to save,” Mr. Reale said.

3. Consider when, where and what to pump

Consumers can save money by strategizing about when to fill up their tanks, financial planners and auto groups said.

Abandon the misconception that driving until your tank nears empty will help you save. In fact, it might damage the fuel pump, said Ms. Edmonds of AAA. The organization recommends filling up when you have no less than one-quarter of a tank left.

Weekends have traditionally been the worst days to purchase gasoline. In 2022, however, the most expensive prices were in the middle of the week, said

a spokeswoman at GasBuddy, a price-tracking app. Drivers should avoid filling up on Saturdays, but Friday or Sunday might offer lower prices, she said.

Another common misconception is that premium or higher-octane gasoline improves fuel economy. “Really, there is no evidence of that for the majority of vehicles on the road today,” said Mr. Reale, except with specialized or performance-focused vehicles. Sticking with regular grade results in immediate savings.

Lastly, always consider whether or not the distance you are traveling for that cheap gasoline you found is actually worth it, said

“You may not be able to make up the difference with your savings,” said Mr. Mitchell. If you travel 10 miles to save 5 cents on a gallon of gasoline, for example, how many gallons would you need to buy to make up the cost of the additional mileage?

Ignoring your check-engine light is a good way to lose fuel economy, said David Bennett, repair-systems manager at AAA. A fault in the engine-management system can hurt your gas mileage, he said.

Most vehicles now come with an instant miles-per-gallon readout on the dashboard, said Mr. Drury of Edmunds.com. Watch for patterns so that you can find your vehicle’s optimal fuel-economy “sweet spot.”

Your vehicle’s “economy mode” will slow the response between throttle and acceleration, Mr. Drury added, which can be a significant factor in fuel-economy loss.

One of the top factors, for example, is tire pressure. Low tire pressure can increase friction between your vehicle and the road, forcing the vehicle to do more work—consequently burning more gasoline and nullifying other fuel-saving measures, Mr. Drury said. Be mindful that hot weather can raise tire pressure and cooler weather can deflate it.

Often owners of vehicles with front- or rear-wheel drive will only concern themselves with the pressure in those two tires, he said. However, drivers should keep all four tires inflated at the manufacturer’s recommended pressure level, which can be found in your vehicle manual.

Drivers should also check and clean their engine air filter every three to six months, Mr. Drury added. A dirty filter can cause your engine to work harder to get clean air, “like drinking from a coffee straw versus a big-gulp straw,” decreasing fuel economy by 1 to 3 miles a gallon.

Ignoring your check-engine light is a good way to lose fuel economy, said

repair-systems manager at AAA. A fault in the engine-management system can hurt your mileage, he said.

Inflation and the Economy

Denial of responsibility! Elite News is an automatic aggregator of the all world’s media. In each content, the hyperlink to the primary source is specified. All trademarks belong to their rightful owners, all materials to their authors. If you are the owner of the content and do not want us to publish your materials, please contact us by email – [email protected]. The content will be deleted within 24 hours.
Andrew MitchellAutomotivebankingBanking/CreditC&E Exclusion FiltercommodityCommodity marketsCommodity/Financial Market News
0
Share FacebookTwitterGoogle+ReddItWhatsAppPinterestEmail

With NBA on deck, Apple’s sports strategy comes into focus