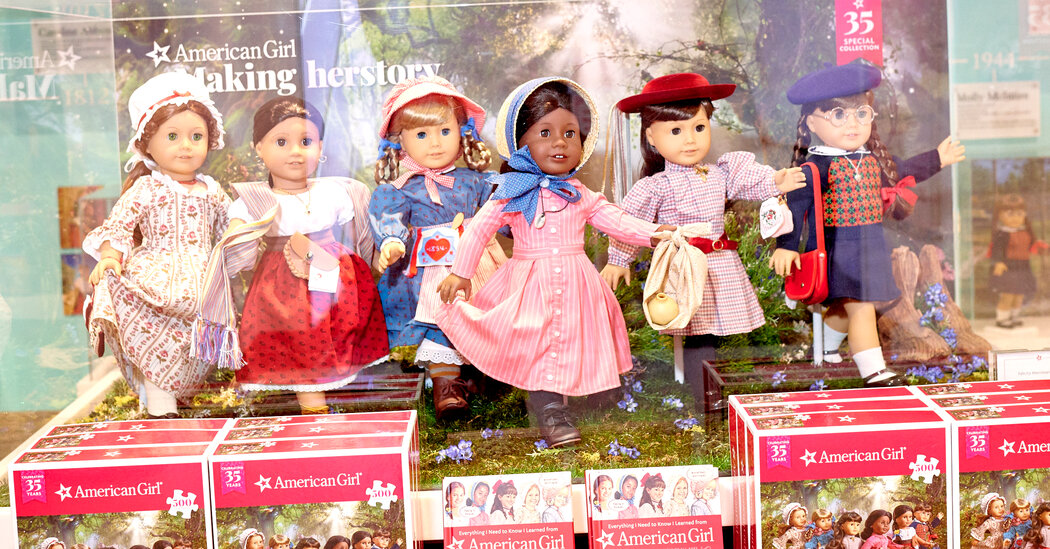 American Girl Doll Jokes Are All the Rage

Since 1986, American Girl dolls like Molly McIntire, recognizable by her braids and round glasses, and Josefina Montoya, dressed in a long red-and-blue skirt and moccasins, have transported children who played with them to Illinois during World War II or to what is now New Mexico, during the early 19th century.

Books like “Samantha Helps a Friend” and “Felicity’s Surprise” have functioned as windows onto history for young readers who eagerly followed their favorite character’s adventures.

Now, a meme has sprung up on social media in which people cheekily suggest expanding the historical American Girl doll universe to include other historical dramas, many of them veering into the absurd.

Other variations refer to archetypes from recent history, like an American Girl doll who “is a whistleblower” or one “who scammed millions from investors with the promise of a start-up social club.”

A recent meme on the @hellicity_merriman Instagram account, which has become a destination of sorts for people seeking humorous American Girl content, features an empty-eyed doll in a bonnet and a long blue skirt smiling with an old-timey ship sailing across the water behind her. The overlaid text says: “We need an american girl doll who was on the mayflower in 1620 but fell off.”

In another variation, a doll in a beret and Converse sneakers stands in front of a pile of detergent packages with the words, “we need an american girl doll who ate a tide pod and almost died.”

The “more ironic you can be, the more we’ve found the posts resonate,” said Barrett Adair, who runs the @hellicity_merriman account with a friend. The account was created in February and is named after Felicity Merriman, an American Girl.

The early memes on the @hellicity_merriman account are more straightforward, combining images of American Girl dolls — symbols of childhood and innocence — with incongruent grown-up concepts like Brazilian butt lifts and OnlyFans, the website where some people sell nude or sexual images and videos of themselves.

A multipart series describes the different ways that American Girl dolls would consume cannabis. (Kit Kittredge, from the 1930s, would roll joints with Bible papers, and Kirsten Larson, who was a pioneer, would use a pipe made out of a bull horn.)

More recently, the account’s administrators decided to experiment with historical memes. They were inspired when they reflected on some of the American Girl books they loved reading as children.

Jamie Cygielman, the general manager of American Girl, said that the dolls have fans of all ages and that the company isn’t surprised “when our fans, especially those who grew up with the brand, continue to engage and entertain each other in culturally relevant ways.”

Ms. Adair’s favorite doll, Samantha Parkington, has an adopted sister named Nellie O’Malley who spent her childhood working in a factory and as a servant. “The stories are really bleak,” Ms. Adair said.

The @hellicity_merriman founders see their feed as “a bit of an escape.” And that escapism could be especially important for their audiences: millennials and Gen Zers who have publicly expressed dismay at the crises their generations have lived through in the last couple of years, including the coronavirus pandemic and the war in Ukraine. “It puts things in a bit of perspective,” Ms. Adair said.

Since beginning to post its takes on the meme, the @hellicity_merriman account has gained tens of thousands of new fans. In the last couple of weeks, its follower count has grown from about 10,000 to more than 75,000.

Ms. Adair sees something simultaneously ironic and empowering in it. Each image imagines the American Girl dolls surviving highly stressful, sometimes catastrophic events. Within the world of these memes, there is nothing the world won’t throw at an American Girl doll, and there is nothing she can’t do. She, a representation of the childhoods of countless girls, can succeed where others have failed.

“An American Girl doll will sign the executive order to cancel all student debt,” Ms. Adair said. “It’s come down to them now.”