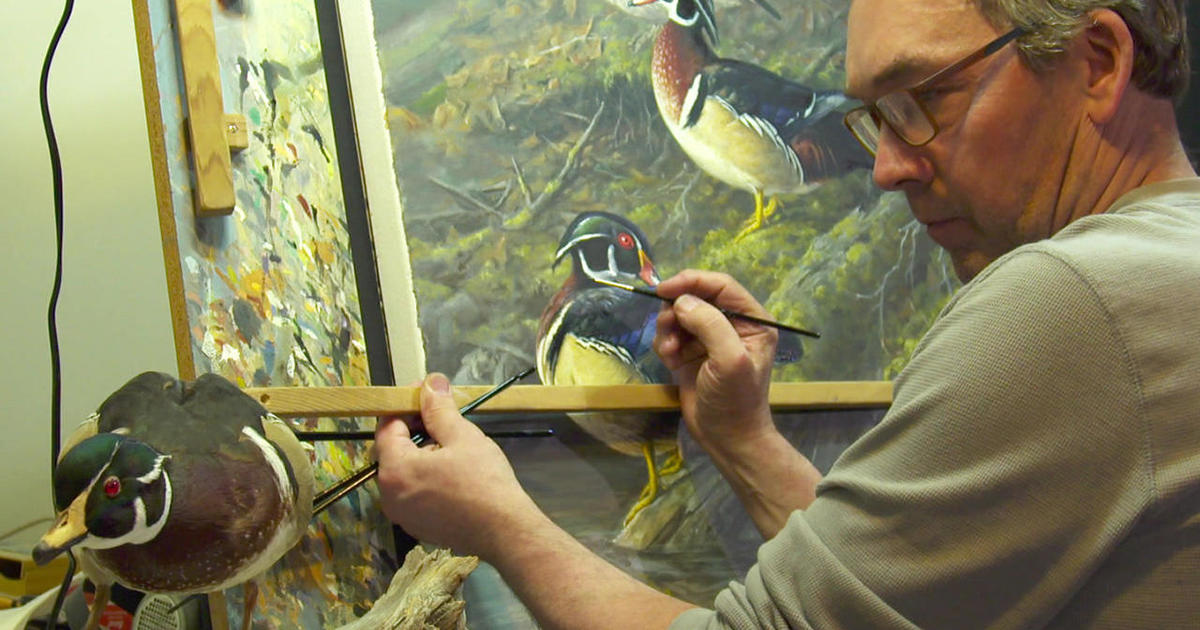 When Jim Hautman goes duck hunting, he’s frequently focused on shooting birds with a camera, hunting for the perfect pose or scene that might inspire his next painting.

At home in Chaska, Minnesota, Hautman has painted dozens of ducks. Wood ducks and mallards, loons and canvasbacks have all appeared on his canvases.

Two ducks in particular, a pair of redheads Jim painted, will soon be known by every duck hunter in America.

Each year, anyone hoping to hunt migratory waterfowl is required to buy what’s known as a “duck stamp.” The scenic stamps are permits, not postage. Overseen by the U.S. Fish and Wildlife Service, the program has raised over a billion dollars for habitat conservation since it began in the 1930s.

Since 1949, the artwork on the stamp has been chosen via a nationwide contest. Hautman won for the first time in 1989, when he was just 25 years old. A day later, he flew to Washington to meet the president.

Correspondent Conor Knighton asked Jim, “How did that first win change your life?”

“Completely,” he replied. “After I won, I would hang up the phone, I couldn’t walk 20 feet without it ringing again. It rang nonstop.”

And his phone keeps ringing. Hautman has managed to win a record-setting six times.

The guy is a regular Duck da Vinci.

Knighton asked, “When you think about your competition, who are you particularly worried about?”

“Well, in my mind, Joe and Bob are the biggest threats,” he smiled.

That would be Joe and Bob Hautman, Jim’s siblings.  Joe has won the duck stamp contest five times:

The brothers are known as the Duck Dynasty of the wildlife world – self-taught sons of a passionate hunter, and a professional artist.

Bob said, “Our mom was our main critiquer. Like, whenever we’d have a problem, she was really good at telling you how to do it or what to do. So, she had a lot of fun with it. My dad did, too, because, I mean, he was into the whole duck stamp thing from the beginning.”

Joe is the keeper of their late father’s duck stamp collection, which includes a 1934 stamp. “He just liked ducks, and he liked the images,” he said. “So, that’s how we learned what a duck stamp was.”

“There was actually a lot of disbelief,” said Joe. “There were some people going, ‘Hey, wait a minute, who painted that?’ There was people thought Jim probably painted that and entered in under my name.”

But each brother has his own distinct style.  Chris Knutson, the owner of Art Barbarians Gallery in Rogers, Minn., said, “I think Bob paints a little more painterly, a little looser, a little more impressionistic. Jim’s a little more tight with his paintings. And Joe is somewhat kind of in the middle.”

At Knutson’s gallery, Hautman originals sell for thousands of dollars. While they’re best known for their ducks, the brothers paint everything from blue jays to bison.

“I don’t know of another family of artists that even compares to these guys,” Knutson said.

The brothers grew up in a suburb of Minneapolis, just down the street from some other well-known brothers. The Coen brothers, Joel and Ethan Coen, lived about seven doors down the street.

In the 1996 film “Fargo,” Officer Marge Gunderson’s husband is a duck painter, and the Coens couldn’t resist throwing in a shout-out to their old neighbors:

Norm Gunderson: “I found out the Hautmans are entering a painting this year.”
Marge Gunderson: “Aww, hon, you’re better than them.”

The Hautmans say they make each other better. They regularly convene to offer up critiques.

And while the stamp contest doesn’t offer a cash prize, it can still be very lucrative. The winner is able to sell thousands of limited edition prints to passionate collectors.

“People like ducks,” Joe said. “They literally have a smile on their face, you know? If you look, I mean, their bill kind of goes out. They’re kind of friendly. They like all kinds of weather.”

There are also all kinds of ways to paint them – in the water, in flight. Even after so much success, that challenge is what keeps the Hautmans coming back.

Knighton asked, “Is there a type of duck or a type of scene that you feel like you’ve never quite cracked?”

“All of them,” Bob laughed.

G7 Summit: Climate goals may be in conflict with fallout from Russian invasion – National