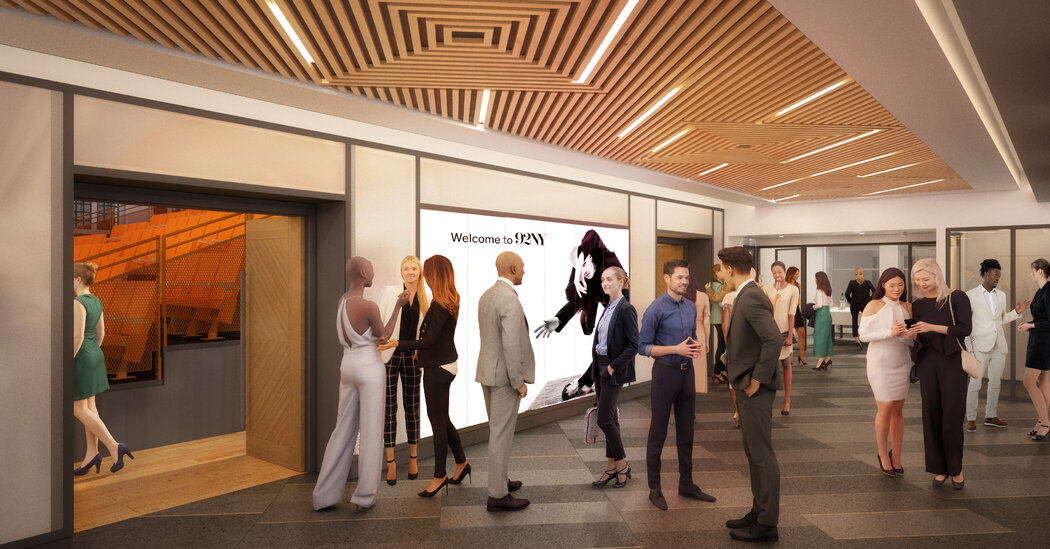 A Rebranded 92nd Street Y Is Getting a Long-Awaited Renovation

Changes are afoot at the 92nd Street Y. For starters, that’s not technically its name anymore.

After emerging from a challenging pandemic that halted its in-person programming, the longtime Upper East Side institution for arts and enrichment has rebranded itself, leaned into digital offerings and is now set to begin a long-awaited renovation of its home on the corner of 92nd Street and Lexington Avenue.

A groundbreaking ceremony is planned for later this month at one of the cultural center’s public performance spaces, Buttenwieser Hall. The work on that space will kick off a new phase of what officials say is a broader $200 million master plan to reimagine the campus, which is mostly concentrated in two buildings on a city block of Lexington Avenue between East 91st and 92nd Streets.

The plan was developed during the pandemic in large part by Seth Pinsky, the chief executive of the institution, which last month was renamed the 92nd Street Y, New York — or 92NY for short.

When Mr. Pinsky, the former head of the Bloomberg administration’s economic development arm, took over in fall of 2019, the cultural and community center had already raised $180 million, some of which was set aside for improvements to the building.

But the pandemic gave Mr. Pinsky and his team more time to figure out exactly how to upgrade the space while keeping it operational. Now, he said, they are undertaking the most significant remodel of the campus since its south building was added in the 1960s.

“The 92nd Street Y is a lot like New York City,” Mr. Pinsky said. “Amazing things happen here. But, like New York City, for a number of years we underinvested in maintenance and capital. And now is the moment for us to improve our internal systems, to make the building more psychically appealing, and to make the building more flexible so that programmatically, as the 92nd Street Y continues to evolve, the building is able to evolve with it.”

Workers have already upgraded some of the building’s infrastructure and created a new outdoor space on the roof of one of the buildings. Next, the $24 million phase of the renovation will include improvements to Buttenwieser Hall, the creation of a new dance studio on the second floor of the north building and upgrades to the gym, known as the May Center. Officials also intend to demolish and relocate some office space in prime areas of the building to make room for even more performance space.

Money on hand will cover this phase of the work, which is likely to take 12 to 18 months. But there will need to be additional fund-raising to complete the full $200 million plan, Mr. Pinsky said. What exactly will happen during the next phase of the renovation is still being discussed.

“We want to go through and advance the plans a little bit and make sure we have a good sense of the pricing and that we have the resources available before we announce exactly what we’re going to do,” he said. “But the goal is for the next phase to be at least as significant as this one — and hopefully even more significant.”

An almost 150-year-old institution, 92NY has become well known for its expansive slate of programming, which includes lectures from high-profile public figures. Founded by a group of German-Jewish professionals, 92NY also offers language and music classes, and activities associated with Jewish life.

Some of the coming renovations to the decades-old buildings are designed to improve energy efficiency, upgrade the heating and cooling systems and ensure that new restrooms and lockers meet the standards of the Americans With Disabilities Act.

On a recent visit, a black-and-white “92NY” banner hung outside on Lexington Avenue, marking the space. The front-facing walls had been repainted with the signature logo, and glass displays had been filled with new posters that offered upbeat proclamations like “INNOVATIVE IDEAS CAN CHANGE THE WORLD.”

But inside, ceilings in some offices were showing their age. Walking from floor to floor, officials acknowledged that the building is something of a labyrinth that has essentially been cobbled together over the decades in a way that does not always make sense. The gym, for instance, is on a different floor than the men’s locker room — one of the issues they hope to partially address through the renovation.

Buttenwieser Hall, which Mr. Pinsky said currently has the “aesthetics of a high-school gym,” will soon say goodbye to its proscenium stage in favor of a retractable stage, movable wings and retractable seating. The hall’s lobby, dimly lit on a recent afternoon, will also be “opened up” in various ways, Mr. Pinsky said. Office space nearby on the same floor will be turned into the new dance studio and recital space.

Mr. Pinsky said the pandemic forced officials to move more programming online and made it clear that 92NY has an audience that stretches beyond the city. As such, they embarked on the rebranding (think of “92NY” like a fashion brand that has Paris in its name, he said — firmly anchored in a world-renowned city in a way that elevates the brand globally); and they have rolled out a new online platform for live interactive courses and instruction called Roundtable by the 92nd Street Y, New York.

The platform grew out of 92NY’s renowned adult education program and will feature discussions with Pulitzer Prize winners, Michelin-starred chefs, poets and leaders in academia. There are courses upcoming on Franz Kafka’s drawings; the sights, foods and wines of Northern California; and world politics.

“Our values, the mission will never change,” Mr. Pinsky said. “But the way that we interface with the public and the way that we deliver our services and our content do have to change.”

Opinion | We need a plan to deny the election deniers victory