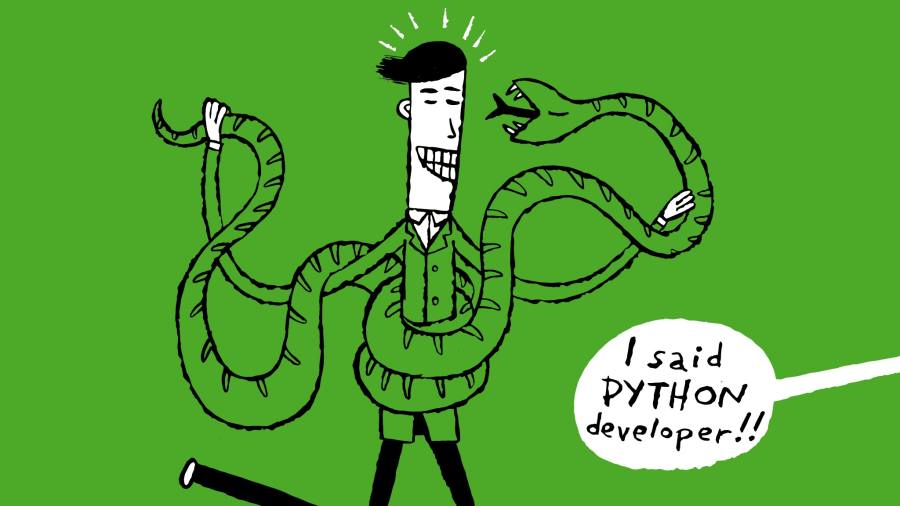 When I was child, I never told my parents: “When I grow up, I want to be a fullstack Ruby on Rails developer.”

Nor did I dream of being a Python engineer, a UX designer, a back-end architect or a front-end lead.

There is a reason for this. These software jobs did not exist. There was no such thing as the internet, as we know it, nor the spectacular array of jobs like these that it has spawned.

This is a matter of regret, considering the benefits of this sort of work.

On US job sites last week, salaries of up to $175,000 were being offered to those who know that Python and Ruby are computer programming languages, and UX means user experience, as in the experience of using a website.

Equally ample wages were available for those who have become experts in the front-end of a website — what you see when doing online shopping — and the back-end, the bit in the background that makes the site work.

There are other benefits. One person can build a self-sustaining business once they master these software skills. They can run it from their laptop by the beach in an agreeable remote-working spot, with other digital nomads.

Pleasing as all this is, there is something unsettling about the speed at which the online revolution has bred a new generation of workers doing jobs that underpin so much of modern life — yet utterly baffle outsiders.

For a start, what does a parent do when a teenager comes home and asks if it is worth getting into Python engineering? It would be one thing if parents had done such jobs themselves, but the tender age of many tech workers makes this unlikely.

A global survey of more than 30,000 software developers last year showed 59 per cent had yet to turn 30. No wonder research in England this year showed parents of 11 to 18-year-olds feel overwhelmed about giving career advice. Nearly two-thirds of them had a child who had shown an interest in a career that they knew nothing about, according to the Talking Futures careers campaign that commissioned the study.

The tech industry’s abysmal use of jargon does not help. It stops job hunters applying for roles that employers struggle to explain, separate UK research by the Babble tech company showed last week.

Then there is the wider problem of the digitally excluded, people who flounder when they suddenly have to use an app to park their car, or a website to check their bank balance.

When my colleague Andrew Hill wrote in February about trying to help elderly relatives deal with demands for online passwords and downloaded documents at banks, insurers and pension providers, he was flooded with sympathetic messages from fellow sufferers. The same thing happened last month when another journalist, Pete Paphides, wrote about his late father getting a parking fine because he was unable to pay electronically.

Whether you’re the boss, the deputy or on your way up, we’re shaking up the way the world works. This is the podcast about doing work differently.

Join host Isabel Berwick every Wednesday for expert analysis and water cooler chat about ahead-of-the-curve workplace trends, the big ideas shaping work today — and the old habits we need to leave behind.

That story prompted campaigner Esther Rantzen to tell the BBC that “very often, decisions are made by people in their forties who literally have no understanding that anyone older should feel differently about the decision they’re making”.

He used to be a tech recruiter in New York City but now runs his own job-search advice website, Career Sidekick — from Panama City. He does not think young software developers are necessarily to blame for making apps that vex older users. As he says, their bosses should be making sure online life is easy to navigate for everyone.

And having taught himself everything he needed to set up his website, Clark has encouraging words for those who fear the digital revolution is leaving too many people behind. “I feel nothing but positive about it,” he says. “There are just more opportunities every year for those who are paying attention.”

I am sure he’s right, but if everyone taking those opportunities paid more attention to the needs of all users, and used language everyone can understand, the inexorably online world would also be a lot better than it is today.