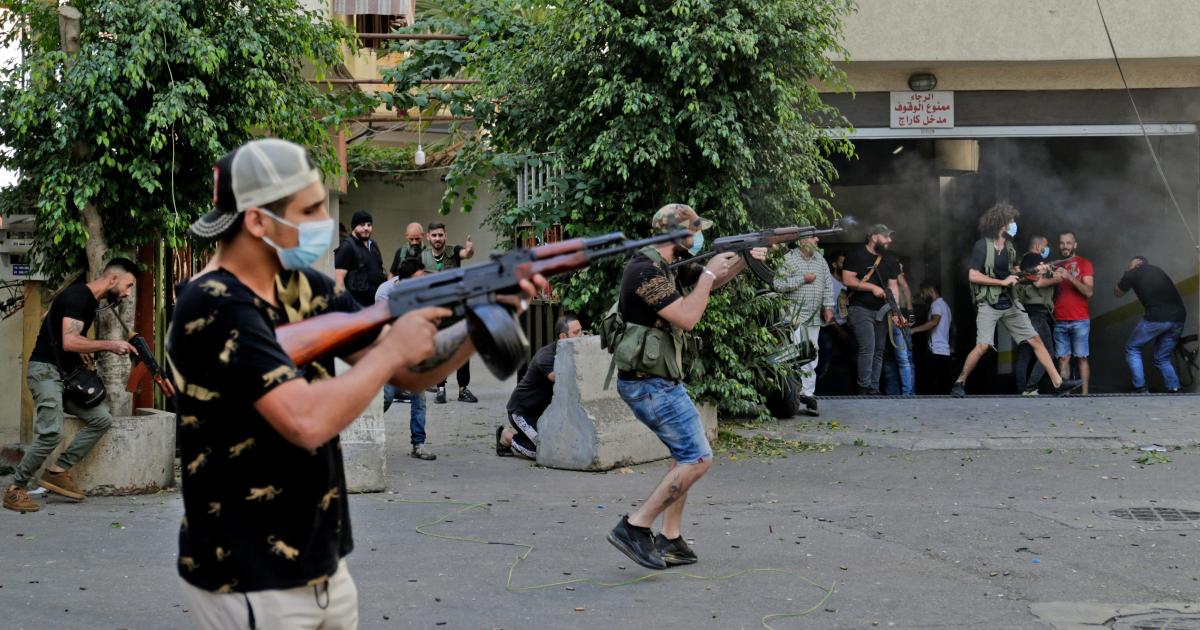 Beirut — Gunfire killed six people and wounded 30 at a Beirut rally organized by the Shiite Hezbollah and Amal movements on Thursday to demand the dismissal of the lead investigator into last year’s port blast. Interior Minister Bassam Mawlawi told a press conference that the death toll had climbed to six. He said that some of the victims were shot in the head.

Heavy fire rang out as ambulances rushed the wounded through the deserted streets, a few blocks from the Palace of Justice, where hundreds of black-clad protesters had gathered to demand Tarek Bitar’s removal.

The judge has in recent days been in the sights of the Hezbollah and Amal parties in particular for insisting on subpoenaing top officials from those groups in his probe into last year’s deadly port blast.

The deaths include a 24-year-old woman who was hit in the head by a stray bullet while inside her home, a doctor at the Sahel hospital in Beirut’s southern suburbs told AFP. The Lebanese Red Cross said at least 30 people had been wounded.

The army reported “bursts of gunfire in the area of Tayouneh – Badaro,” a largely residential area of Beirut. “The army rushed to cordon off the area and deploy in its neighborhoods and their entrance. Patrols started as did the search for the shooters to detain them,” it said.

In a follow-up statement, the military warned that it would open fire at anyone firing live rounds, calling on civilians to evacuate the area.

Prime Minister Najib Mikati called for calm to be restored and warned against attempts to drag Lebanon into violence.

Seen as a last hope for justice by many Lebanese but condemned as biased and corrupt by political leaders, Bitar has sparked deep divisions within government between those who want to keep him in his place and those who are pushing for him to go.

The Court of Cassation on Thursday turned down a lawsuit filed by two ex-ministers demanding his replacement, a court official told AFP on the condition of anonymity.

“Bitar does not fall under the court’s jurisdiction so it does not have the authority to consider requests for his dismissal,” the official said.

It is the second time this month that the judiciary has ruled in favour of Bitar, who is hailed by human rights groups and relatives of blast victims as a symbol of judicial independence in a country where political impunity has long been the norm.

The ruling, which goes into effect immediately, would allow Bitar to resume enquiries into the August 4, 2020 explosion which killed more than 200 people and destroyed large swathes of the capital.

But the investigator’s fate is all but clear as Hezbollah and Amal press ahead with a campaign aimed at removing him.

Ali Hasan Khalil, a senior Amal movement lawmaker, threatened a “political escalation” if the course of the investigation “was not rectified” after Bitar on Tuesday issued an arrest warrant against him for failing to show up for questioning.

Tensions spilled into cabinet with a meeting on Tuesday ending in a row as ministers affiliated with Hezbollah and Amal pressed the government to support their demand to replace Bitar.

A follow-up session scheduled for Wednesday was postponed, signaling no agreement has been reached between factions in the cabinet, with some ministers arguing the government should not intervene in judicial matters.

Denial of responsibility! Elite News is an automatic aggregator of the all world’s media. In each content, the hyperlink to the primary source is specified. All trademarks belong to their rightful owners, all materials to their authors. If you are the owner of the content and do not want us to publish your materials, please contact us by email – [email protected]. The content will be deleted within 24 hours.
BeirutexplosionLebanonportprotest
0
Share FacebookTwitterGoogle+ReddItWhatsAppPinterestEmail

WHO warns progress on tuberculosis being undone by Covid pandemic

Woman who became a bodybuilder says the ‘passive…