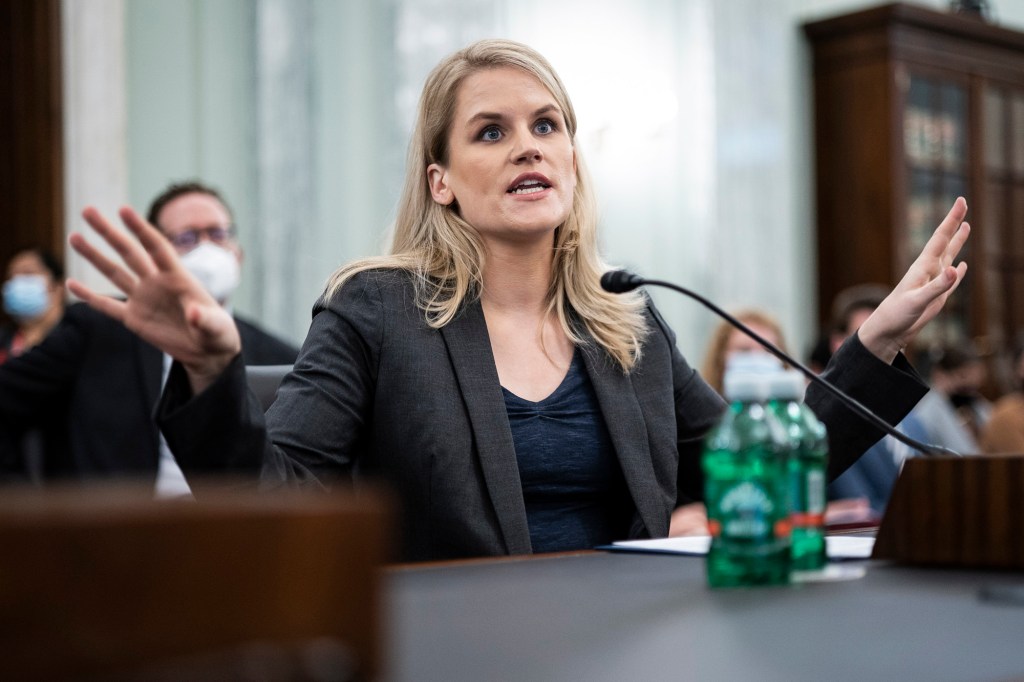 Facebook whistleblower Frances Haugen testified in front of a key Senate subcommittee on Tuesday, sounding the alarm about everything from Instagram’s effect on teen girls to the national security threats posed by Facebook.

She said the company needs to declare “moral bankruptcy.”

Prior to her three hours of testimony, Haugen sent thousands of internal Facebook documents to lawmakers, who are pushing a slate of bills to rein in the tech giant and calling on CEO Mark Zuckerberg himself to testify under oath.

Here are five main takeaways from her testimony:

Teen girls on Instagram face a barrage of harmful content, including images promoting anorexia and other body image disorders. Since Instagram’s algorithms prey on vulnerabilities and teens have poor impulse control, they keep coming to the app even though it makes them feel worse about themselves, according to Haugen.

This finding is backed up by documents she leaked to the Wall Street Journal, which include an internal Facebook presentation from March 2020 stating that “32 percent of teen girls said that when they felt bad about their bodies, Instagram made them feel worse.”

“Instagram is about bodies, and about comparing lifestyles,” said Haugen, arguing that the photo-sharing app is worse for teens than competitors TikTok and Snapchat.

Facebook has said the Instagram study was taken out of context and that the app does more good than harm for teenage girls and other users by connecting them with friends. The company has also questioned Haugen’s credibility by saying she didn’t work for the Instagram or child safety teams while at Facebook.

While a Facebook employee from June 2019 to May 2021, Haugen spent time working on the company’s counterespionage team. Through this work, she said she saw China using Facebook to surveil Uyghur dissidents and Iran, using the platform for espionage.

“I believe Facebook’s consistent understaffing of the counterespionage information operations and counterterrorism teams is a national security issue, and I’m speaking to other parts of Congress about that,” she said. “I believe the fact that Congress doesn’t get a report of exactly how many people are working on these things internally is unacceptable because you have a right to keep the American people safe.”

“I have strong national security concerns about how Facebook operates today,” she added.

Sen. Richard Blumenthal (D-Conn.) said the Senate subcommittee where Haugen testified Tuesday may ask the whistleblower to come back for another hearing specifically focused on national security issues.

Haugen said she would support rules requiring social media companies to display content in the order it was posted, which she says would fix these issues.

The whistleblower also said that ongoing efforts to break up Facebook by forcing the company to sell off Instagram or WhatsApp would not solve her problems with the company because they would not lead to algorithm changes.

Facebook has said it has tweaked its algorithms to decrease the spread of hate speech and misinformation.

Facebook founder and CEO Zuckerberg has been conspicuously absent over the past month as Haugen’s leaks were reported in the press.

As the Wall Street Journal published a series of damning articles about Instagram’s effect on teen girls and Facebook’s failure to track down drug dealers and sex traffickers, among other issues, Zuckerberg embraced watersports.

His only response to the Journal articles was a bad joke about a surfboard. On Sunday — the same day Haugen revealed her identity in an interview with “60 Minutes” — Zuckerberg posted on Facebook about going sailing.

“Rather than taking responsibility and showing leadership, Mr. Zuckerberg is going sailing,” Blumenthal said during the hearing.

The New York Times reported in September that Zuckerberg has decided to distance himself from scandals by apologizing less and letting surrogates take flak. That plan appeared to be in full effect last week, when Facebook sent its lesser-known chief of global security, Antigone Davis, to testify in front of the same Senate subcommittee that hosted Haugen.

As Democrats and Republicans squabble over spending bills and the debt ceiling, hating Facebook is the rare topic both parties can agree on. Politicians from both parties have no problem laying into the company, especially when it comes to Instagram’s effect on teen girls.

But despite a variety of bipartisan legislation floating around in Congress calling for everything from algorithm tweaks to an outright breakup of Facebook, there does not seem to be a clear consensus about what bills can actually pass.

Children struggle to hold pens because of excessive use of iPads, claim experts