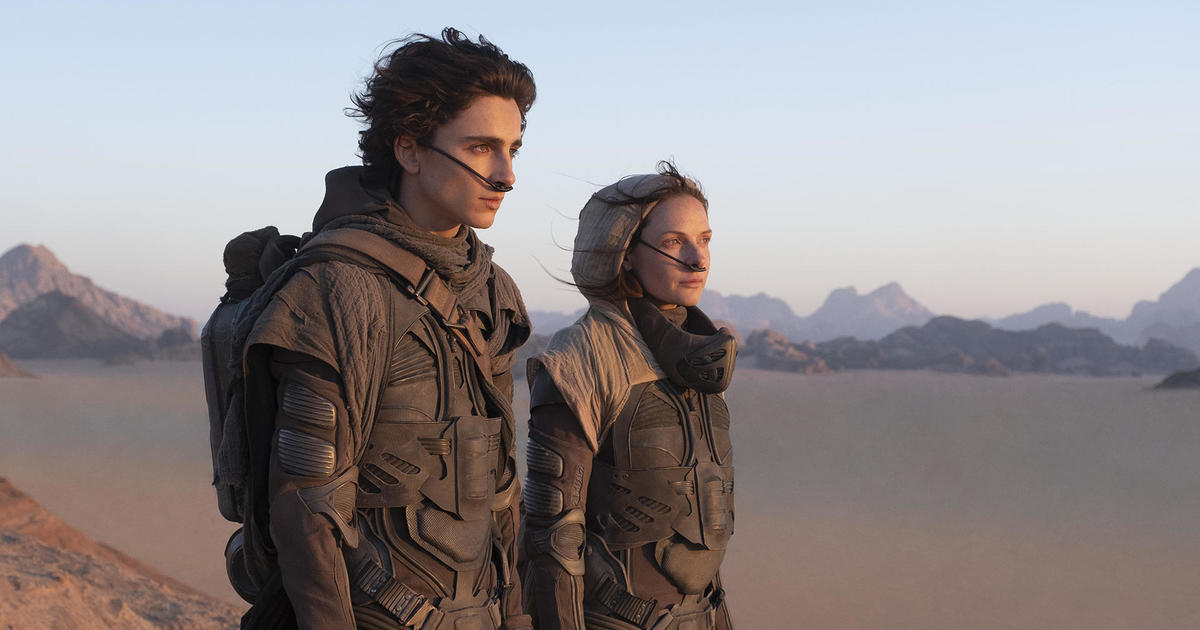 The 59th New York Film Festival has entered its final weekend, wrapping up with the New York premiere of one of the most eagerly-awaited spectacles of recent years. Reviews of some of this weekend’s highlights are below.

For more reviews from this year’s festival read Part One and Part Two of our coverage.

The festival wraps on October 10. Proof of COVID vaccination and masks are required in order to attend screenings.

“Dune” – Denis Villeneuve has already proved his mettle on visionary science fiction with “Arrival” and “Blade Runner 2049” – smart dramas that created rapturous worlds which did not quite overwhelm the human actors (but did confront them head-on). So, he seems the ideal dramatist to take on Frank Herbert’s mammoth 1965 sci-fi novel, which begat a series of sequels and off-shoots detailing the political and spiritual machinations of a universe thousands of years in the future.

But for all the exquisitely detailed world-building, the story is really that of a single individual, Paul (Timothée Chalamet), and his maturation from the son of Duke Leto, head of the House of Atreides, to the leader of a resistance movement on a barren planet (and, ultimately, a Messiah figure). It’s a proper mythic hero’s journey, a tale consumed not just with moral tests, political intrigue, betrayals and family bonds, but also dreams, witchcraft, advanced technologies, and monstrous beasts.

While Herbert’s stories have inspired visionary directors before (David Lynch concocted a beautifully detailed but over-stuffed version in 1984, and Alejandro Jodorowsky’s conceived-but-never-filmed version has still earned cult appeal), Villeneuve’s crew has done superlative work, with production and costume design, cinematography, visual effects and editing that are better than we could have dreamed of. And throughout the film’s 2.5-hour running time, the exposition never really gets ahead of the audience, even for those unfamiliar with the arcane language of the books. You do not have to bone up on different planets, or what are the Bene Gesserit, Fremen or Sardaukar, to follow the plot (though I am still unclear on the film’s explanation of the Kwisatz Haderach).

Also thankfully, we are treated to a cast that is as grand as the settings. Chalamet burnishes his reputation as one of today’s most appealing young actors, with a performance that carefully calibrates eagerness, and a resistance to bearing the mantle of responsibility. Rebecca Ferguson is splendid as Paul’s mother, a Bene Gesserit “witch” instructing him in paranormal communication; and Oscar Isaac is regal as Duke Leto. The rest of the cast (Jason Momoa, Josh Brolin, Stephen McKinley Henderson, Sharon Duncan-Brewster, Javier Bardem, Stellan Skarsgård, Zendaya and Charlotte Rampling) also garners high marks.

The only drawback, as it were, is that Villeneuve’s film is just the beginning of Paul’s story – “Part One,” the opening titles dismayingly announce. And unlike the release of the first “Lord of the Rings” film in December 2001 (when we were promised Christmas gifts of movies the following two years), we do not know when, or even if, the studio will green-light the shooting of “Part Two.” [A plea to Warner Brothers: Pull out the props and costumes from storage, fly the cast back to the deserts of Abu Dhabi, and get cracking.]

Screens October 8, 9. From Warner Brothers. Opens in theaters nationwide October 22, which is when “Dune” also begins streaming on HBO Max (which is definitely not how you want to experience this film, no matter how jumbo your monitor).

To watch a trailer click on the video player below:

“Jane by Charlotte” (North American Premiere) – The British-born singer, model and actress Jane Birkin produced some internationally renowned – even scandalous – music (as well as a child) during her relationship with French singer-songwriter Serge Gainsbourg in the late 1960s and ’70s. In this breathtakingly intimate documentary directed by her daughter, actress Charlotte Gainsbourg (star of such films as “Melancholia”), Birkin revisits her relationships with men, with notoriety, with the creative impulse, and with the inexorable advancement of time.

With barely any mention of a resume per se, this hardly counts as a career retrospective for a woman with hit songs and appearances in acclaimed international films; instead, it’s a touching testimonial of a mother-daughter relationship that has endured the intrusions of fame, from both sides, and of a life which Birkin has forged for herself in France, partly in the spotlight, partly cloistered in nature, and partly paying tribute to her late lover Serge – a living treasure dedicated to a French monument.

Recent announcements of Birkin’s health – a cancer diagnosis, and a stroke – give “Jane by Charlotte” a somewhat uncomfortable immediacy of purpose (Get Mother on film before it’s too late), but the bond the two share is strong and entrancing. No other filmmaker could have created this personal a tribute. Screens October 8. In French with English subtitles. A Utopia release, coming to theaters in 2022.

“Parallel Mothers” (North American Premiere) – At its most schematic, Pedro Almodovar’s new film, about two single women who share a maternity ward room and give birth on the same day, would seem like a soap opera. But the depth of the relationships, and the damage done to their relationships by the withholding of the truth, is far more insightful, especially when played against the damage caused to families over generations by Spain’s history of war and repression.

When Janis (Penélope Cruz) finds out the truth about Ana (Milena Smit) and her baby, which touches on the power of motherhood, secrets become cruelly wrenching, steering the two into unexpected places. Both actresses give strong performances in a film about the unearthing of hidden truths, which Almodovar dramatizes with touching forthrightness. Screens October 8. In Spanish with English subtitles. A Sony Pictures Classics release, opening in theaters December 24.

“Memoria” (U.S. Premiere) – Tilda Swinton stars as a woman who seeks answers to the mysterious auditory hallucinations she suffers – booming sounds that have no obvious cause. However, “suffer” may not be the right word, as the experience of the sounds leads her through a journey both internal (towards an understanding of her own psyche) and external (towards a possible source of the sounds), which requires her to let go of preconceptions and expose herself to the unknown.

Directed by Thai filmmaker Apichatpong Weerasethakul (who won the top prize at Cannes in 2010 for “Uncle Boonmee Who Can Recall His Past Lives”), “Memoria” is a meditative story of how an unsettling, inexplicable event can disorient, and reorient, our lives beyond the expected, the ordinary, or the modern. Swinton’s performance is one of remarkable stillness – she doesn’t so much have to react to other actors as to her own character’s instability and inarticulateness, taking small steps towards a serene state of grace. It’s a film that rewards close attention, in particular its effective soundtrack, which entrances and startles.

Winner of the Jury Prize at Cannes, and Colombia’s submission to the Academy Awards for Best International Film, “Memoria” screens October 10. In English and Spanish with English subtitles.

Warning: If you anticipate waiting to view this film on video, you’re in for a shock: the distributor, Neon, has announced it will never make it available in home formats, only screening “Memoria” in cinemas, indefinitely, by taking the shot-on-film production on a tour, one city at a time, beginning with a one-week run at New York City’s IFC Center on December 26.

“Hit the Road” (U.S. Premiere) – Panah Panahi, son of the acclaimed Iranian filmmaker Jafar Panahi (“3 Faces”), directs his debut film, a comic-drama about a family traversing Iran towards the border, on a mission that is kept secret from the youngest, a rambunctious six-year-old. As with most road movies, the focus is on the journey rather than the destination, but this film’s trajectory takes us into the difficult terrain of a couple saying goodbye to their eldest, a young man being persecuted for political activities.

Panahi’s quietly affecting drama is leavened with wry humor (the family’s run-in with a competitive cyclist is a wonderful joke that goes right over their heads), and is capped with a thrillingly Kubrickian ending that seems all too appropriate. A terrific first feature. Screens October 10. In Persian with English subtitles. A Kino Lorber release, coming to theaters in early 2022.

“Petite Maman” – This latest feature from director Céline Sciamma (the remarkable 2019 drama “Portrait of a Lady on Fire”) is brief – 72 minutes – but full of warm, gentle vibes. A young girl, Nelly, travels with her parents to her mom’s childhood home (to be closed up following the passing of her grandmother), and in the forest nearby she meets and befriends another young girl, Marion. If you’ve ever seen “The Twilight Zone,” you’ll likely guess who this little girl represents, but the girls’ bond elicits both the whimsical camaraderie of children at play and deep emotions about loss and grief. Screens October 10. In French with English subtitles. A Neon release, opening in theaters later this year.

“The Worst Person in the World” (U.S. Premiere) – Renate Reinsve won the Best Actress Award at Cannes for her glinting portrayal of a young millennial, Julie, who is unsure of her path, wary of relationships, and not averse to cheating on those she professes to love. Navigating her attraction towards two very different men, Julie makes some poor decisions, regrets chances not taken, suffers withering patronization from older, more settled adults, and feels the weight of expectation as she approaches the end of her 20s.

Joachim Trier’s story of the coalescence of a young woman’s identity, told in brief chapters, is sharper and a tad darker than what we might expect from a rom-com, but Reinsve’s effervescence goes a long way in conjuring a character we pull for – and in a scene that can only be described as magical realism, she literally stops the world. Screens October 10. In Norwegian with English subtitles. A Neon release, coming soon to theaters (date not announced).

“Drive My Car” (U.S. Premiere) – Adapted and expanded from a Haruki Murakami short story, Ryûsuke Hamaguchi’s three-hour tale of grief and forgiveness is a moving tale of a theater director, Yûsuke (Hidetoshi Nishijima), whose life has been upended by tragedy and an unfaithful partner.

His refuge from the world has been the privacy of his car, a trusty old, red Saab. But when he travels to Hiroshima to direct a production of Chekov’s “Uncle Vanya,” he learns that he must allow a driver to chauffer him around. What begins as a wary acquiescence to the young woman behind the wheel, Misaki (Tôko Miura), becomes (for driver and passenger) a revelation of secrets that have been the source of trauma for them both, and an avenue to acceptance of responsibility, pain and jealousy. The journey they each make acknowledging long-buried hurt is framed by rehearsals that, in a twist of fate, bring together Yûsuke and a young actor with whom his wife had had an affair. (Chekov would have approved.)

Hamaguchi (who also wrote and directed another festival highlight, the anthology film “Wheel of Fortune and Fantasy”) is remarkably attuned to the tensions of two people forced to accommodate one another and who grow from the experience, and the film – despite its running time – never flags. In fact, it sails. In Japanese with English subtitles. The Sideshow/Janus Films release will open in U.S. theaters November 24.

David Morgan is a senior editor at CBSNews.com and cbssundaymorning.com.

Denial of responsibility! Elite News is an automatic aggregator of the all world’s media. In each content, the hyperlink to the primary source is specified. All trademarks belong to their rightful owners, all materials to their authors. If you are the owner of the content and do not want us to publish your materials, please contact us by email – [email protected]. The content will be deleted within 24 hours.
cinemadrive my carduneDune reviewfilm festivalsmemoriaNew York Film Festivalparallel mothers
0
Share FacebookTwitterGoogle+ReddItWhatsAppPinterestEmail

The Joy of Using Slack for Remote Work