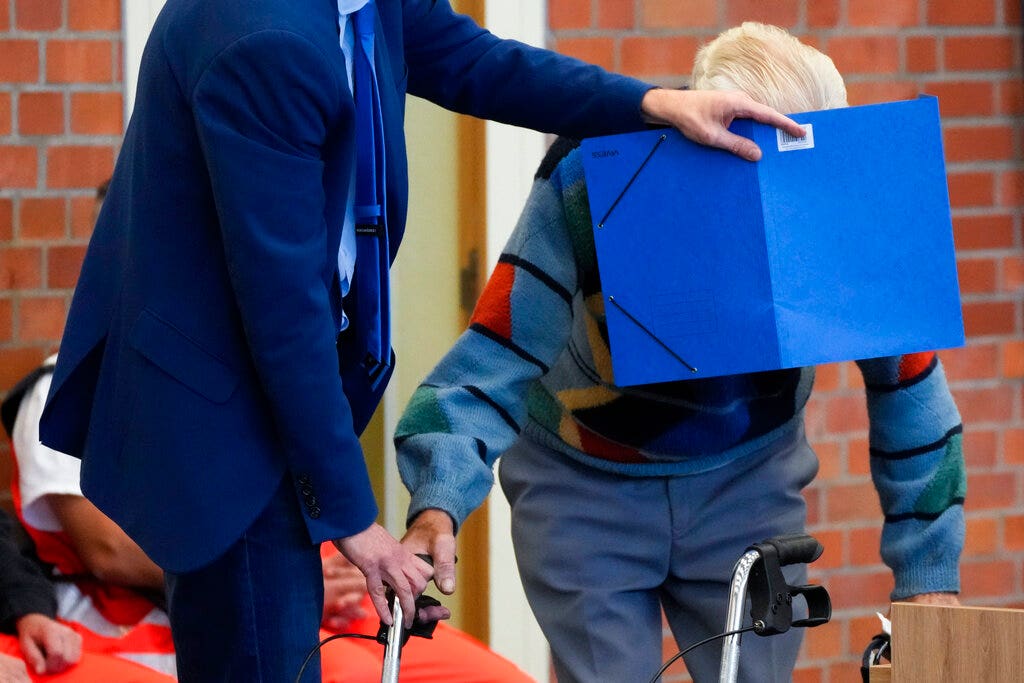 A 100-year-old man on Thursday stood trial in Germany, accused of activity as a Nazi SS guard at a concentration camp during World War II.

The suspect, identified as Josef S., did not show his face or make any comment in his defense during a court appearance. Josef S. has been charged with 3,518 counts of accessory to murder for the deaths at Sachsenhausen near Berlin.

Lawyer Stefan Waterkamp covers the face of accused Josef S. as the arrive at the court room in Brandenburg, Germany, Thursday, Oct. 7, 2021. The 100-year-old man charged as an accessory to murder on allegations that he served as a guard at the Nazis’ Sachsenhausen concentration camp during World War II. (AP Photo/Markus Schreiber)

“The defendant knowingly and willingly aided and abetted this at least by conscientiously performing guard duty, which was seamlessly integrated into the killing system,” prosecutor Cyrill Klement told the court.

More than 200,000 people were held at Sachsenhausen during the war, with tens of thousands dying from starvation, disease and exhaustion from forced labor and other causes.

Executive Vice President of the Auschwitz Committee Christoph Heubner told reporters he was disappointed that Josef S. would not speak on the allegations.

Leon Schwarzbaum, a 100-year-old survivor of Sachsenhausen, attended the trial in hopes of hearing a conviction.

“This is a trial for my friends, acquaintances and my loved ones,” Schwarzbaum said.

The trial starts a week after the trail of another suspected Nazi, who fled the opening of her trial. Authorities tracked her down within hours and her trail is set to continue on Oct. 19.

‘Too close for comfort’: demand for antibodies surges among unjabbed

Miami condos for sale cost $31 million, or about 560 bitcoin

I challenge Randi Weingarten, the most dangerous person in…