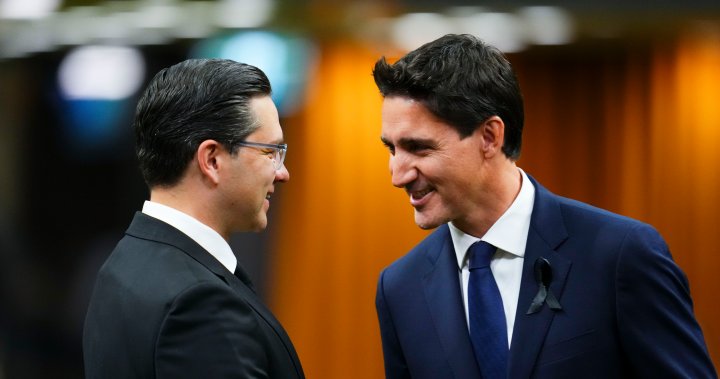 1 in 3 Canadians believe Trudeau should stay in power as Tories edge ahead: poll – National

The proportion of Canadians who believe Prime Minister Justin Trudeau deserves to remain in power appears to be slightly lower than it was one year ago amid the federal election, a new poll suggests.

Polling done by Ipsos exclusively for Global News indicates 33 per cent of Canadians say Trudeau deserves to be re-elected, which is a drop of four per cent compared to polling done last fall.

Sixty-seven per cent say it is time for another party to take over.

“What we’re seeing in the numbers right now is not so much that there’s been a ‘new leader bump’ for the Conservatives, though they’re up just a little bit but within the margin of error,” said Darrell Bricker, CEO of Ipsos Public Affairs. “It’s really more that the Liberals have been losing.”

He said the data suggests people who have previously voted Liberal are bleeding out to not only the Conservatives, which are also seeing a consolidation of some voters from the People’s Party of Canada, but also to the NDP and the Bloc Quebecois.

“It’s not so much about the surge of the Conservative Party as it is about the slipping of the Liberals.”

That Ipsos polling suggests it is the federal Conservatives that now hold a five-point lead on the Liberals among decided voters, with 35 per cent of those surveyed saying they prefer that party compared to 30 per cent for the Liberals, 20 per cent for the NDP, and seven per cent nationally for the Bloc Quebecois.

Those numbers represent a one-point increase since the election for Conservatives, and a three-point decrease for the Liberals. Support for the NDP is up two points since that same period.

Support for the People’s Party of Canada stands at three per cent, down two points since last fall, while three per cent of decided voters also say they plan to vote for the Green party, an increase of one point.

One in 10 said they would not vote, and 14 per cent said they didn’t know who they would vote for in the next federal election. While there is no election on the immediate horizon, the Liberal-NDP governance deal struck earlier this year aims to last until 2025 — though could fall apart at any time.

This is Pierre Poilievre’s Conservative party. What will he do with it?

The Conservatives polled higher than the Liberals in every province west of Quebec, including in Ontario where Bricker said the party is polling at 37 per cent compared to the Liberals at 30 per cent.

The Liberals did so over the Tories in Quebec and Atlantic Canada.

But the strong Ontario numbers in favour of Conservatives could suggest Poilievre is breaking through in the vote-rich Greater Toronto Area in a way recent predecessors have not, Bricker said.

“That they’re that far ahead means if these numbers were the numbers we had on election day, they would probably win the most seats in an election campaign,” he added.

“At least at the moment, Pierre Poilievre has broken through a bit in the 905. We’ll see if it endures.”

Those new numbers were collected between Sept. 19 and Sept. 21, just before Trudeau and Poilievre locked horns on Sept. 22 for the first time in question period since the latter was elected Tory leader.

Poilievre won that leadership campaign on Sept. 10, and in the weeks since all of the federal parties have made affordability and cost of living issues a key focus of debate in and out of the House of Commons.

These are some of the findings of an Ipsos poll conducted between September 19 to 21, 2022, on behalf of Global News. For this survey, a sample of 1,000 Canadians aged 18+ was interviewed online. Quotas and weighting were employed to ensure that the sample’s composition reflects that of the Canadian population according to census parameters. The precision of Ipsos online polls is measured using a credibility interval. In this case, the poll is accurate to within ± 3.5 percentage points, 19 times out of 20, had all Canadians aged 18+ been polled. The credibility interval will be wider among subsets of the population. All sample surveys and polls may be subject to other sources of error, including, but not limited to coverage error, and measurement error.